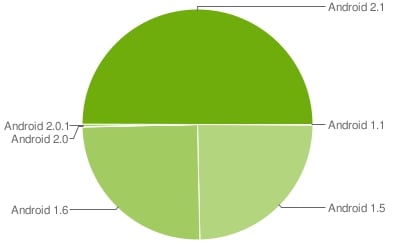 Every 2 weeks Google is nice enough to update a chart on their website that shows the current distribution of Android devices by what version they run. It’d be nice if other smartphone manufactures did this. Apple obviously doesn’t need to do this since they only sell one device at a time, and even then all their old devices get software upgrades. Nokia devices have fragmentation issues at the device level. Many applications that are written for the N97 will simply not run on other S60 5th Edition hardware such as the 5800 or 5230, so even if the Finnish giant made such a handy reference chart … it’d be useless.

What you’re looking at is 50% of all Android devices on the market are running 2.1, an operating system that was only announced this year. Then you have 24.6% devices running Android 1.5 and another 25% running Android 1.6.

If you’re fine with the old version of Android, and an old device, power to you, but I can’t stress how nice it is to have a 1 GHz Qualcomm Snapdragon processor inside your pocket. Things are only going to get more insane with Motorola promising a 2 GHz device by the end of the year, and the first dual core mobile phones coming to market some time in 2011.

While Android is picking up steam with multiple handsets and carriers, data from Chitika suggests the Motorola Droid and Verizon...