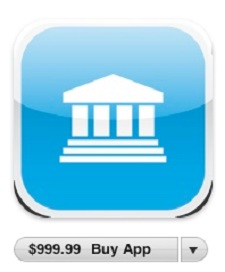 You know the iPhone app ecosystem is something special when a $1,000 app is thriving. That’s exactly what’s happening with BarMax, as the the $1,000 app is profitable and the creators plan to expand.

The iPhone program helps California law students pass the state’s bar exams. According to TechCrunch, the program has already generated more than $100,000 in sales and it is already profitable.

Even though this may seem like an outlandish amount to pay, it’s simple return-on-investment math for those who download BarMax. The iPhone app is packed full of information that could help them earn at least six figures a year, so the entry price is well worth it. In fact, BarMax is cheaper than its main competitor, BarBri, by a fair amount.

The company plans to expand to New York next and then to various other states regions because each state has a different version of the bar exam. The future looks pretty bright for the BarMax folks, I believe.

This is a far cry from the first $1,000 iPhone app, I Am Rich, which was essentially a jokey novelty for those who were, well, rich. Apple eventually removed the app and refunded the money to users for some reason (it was no more offensive to me than the thousands of fart apps – and don’t even get me started on those annoying vuvuzela apps).

The app itself is a good story but it also points to the larger trend about how robust the app economy is becoming. We already know that Apple has paid over $1 billion to developers and that payout should only grow as the iPhone 4 and iOS 4 roll out.

With the rise of Android and even the cool programs possible on Windows Phone 7, we’re entering an innovative period on the mobile software side. Just as importantly, apps like BarMax show that smart devs can adequately monetize these innovative programs.

Farewell Once More, Sweet Unlimited 3G for the iPad

Remember when AT&T announced its ridiculous (or ridiculously awesome, depending on whom you ask) new data plans? The one where...