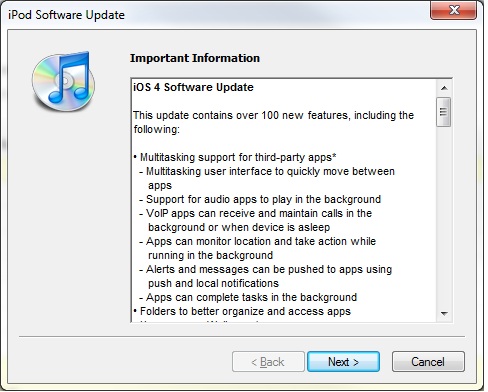 Well, it’s finally here. You can head on over to iTunes and download iOS 4 for your iPhone 3GS or newer iPod Touch and get multitasking, iBooks and more.

I’m attempting to download it on my iPod Touch as we speak but the intense demand, coupled with my cruddy Internet connection (come on, Comcast!) means I’ll be waiting for at least another hour until I can tear into it. But, we do know a lot about what the latest version of the software will bring.

First and foremost is the ability to multitask and run programs in the background. This means you can finally run Pandora in the background, use Loopt to check in to places automatically, or use Skype or Line2 to make your iPhone usable for calls. While some would argue that it’s not true multitasking, this should finally plug the biggest hole in the iPhone platform.

You literary types will be happy to know that iOS 4 brings the iBooks format to the iPhone. This enables users to get books on their handsets, and the latest version includes PDF support and the ability to sync with your iPad and other devices.

Of course, all these apps can lead to a cluttered screen full of pages of programs. A small, but much-needed, feature of iOS 4 is the ability to group apps into folders. This, too, has been available on Android and BlackBerry for years but it’s a nice feature for iPhone owners.

Another two additions of iOS 4 could have huge impacts on the app store. The Game Center will provide an Xbox-Live-type service for iPhone games, including statistics, achievements and match making. This isn’t expected to go live until the fall but it could be a game changer (bad pun intended).

The iAd platform will also be in iOS 4 and this provides developers with the ability to integrate rich-media advertising in apps. While this could be annoying, it could also lead to devs offering more free apps.

The latest software will also include multiple other new features that we’ll cover down the line, particularly as the iPhone 4 launches later this week. In the meanwhile, let us know if you’re planning to update and your thoughts on the latest software.

It doesn't seem like a big surprise, but Apple has confirmed that its upcoming video-chatting service, FaceTime, won't use your...