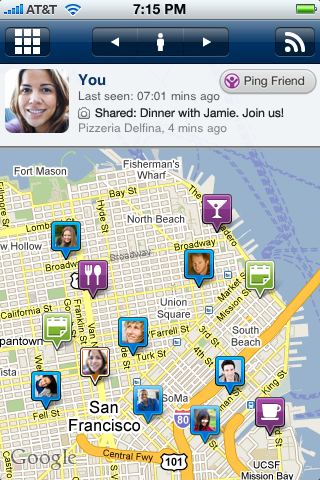 While most people think of using Pandora in the background with iOS 4, the firmware’s ability to multitask will also be a big boon for location-based services like the Loopt. The company will update its iPhone app to including background processing and you will be able to check-in automagically.

The latest version isn’t in the App Store yet but we’ve been told that it should go live soon (no later than this week). Loopt told us the 3.0 version will allow users to check in at various locations in the background, without having to dive directly into the app. You’ll be able to toggle this setting, of course, but this could really make the app more museful.

“The ability to run location-based apps in the background makes serendipity happen. With the new capabilities provided by iOS 4, users will be able to share their location and receive alerts on the phone in their pocket when they’re near a friend. This sort of accidental discovery just wasn’t possible with a check In-only approach to location sharing,” said Sam Altman, CEO of Loopt, in a prepared statement. “We will be able to bring the full Loopt experience to our users, allowing them to find friends with a single click or instantly discover interesting events nearby in a way that is fully controlled, adjustable and above all privacy-conscious.”

Like the Loopt Star app, the 3.0 version of Loopt will have stronger integration with Facebook and I think this is the right move. With nearly 500 million users, Facebook is quickly becoming the de facto standard for social networking and its tough to ask people to replicate their social graph with your smaller service. Loopt is essentially letting Facebook do the heavy lifting in terms of connections while focusing on what it does best: offering location-relevant services.

We’ll keep our eyes peeled for the iOS 4-version of Loopt and give you our thoughts.