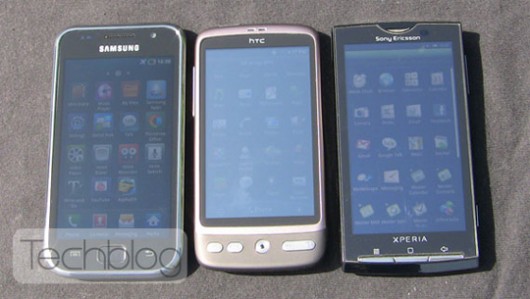 The contenders are The Samsung Galaxy S (Super AMOLED screen) , The Sony Ericsson Xperia X10 (LCD Screen), and the HTC Desire (AMOLED screen). The video is almost 7 minutes long, but it may take that long to come up with your own conclusions. All of the devices have their brightness settings to the top, and their positions are switched around to ensure fairness.  The Desire is pretty much useless, as you can barely see anything on the screen besides the clock widget on top. The Super AMOLED display on the Galaxy S is much more clear than that of the Desire, but it looks like that X10 is the easiest to see, hands down.

The X10 may have the upper hand as far as ability to be seen in sunlight, but the AMOLED technology used in both the Desire and the Galaxy S is far superior in all other respects. Neither the AMOLED nor the Super AMOLED displays need backlights, which is more energy-efficient, and provides for a better contrast and better color saturation than any LCD screen technology can hope to achieve.

While the benefits of AMOLED screens are there, some may just want to be able to see their screens in the sun, whether or not it drains more battery power. I’d have to agree, but I think I would be just fine using a Super AMOLED display. It’s much better than a regular AMOLED display, especially on a gorgeous 4-incher like the Galaxy S.

I think I’m pretty much sold on the Samsung Galaxy S or the Galaxy S Pro already. Both are very high-end smartphones that really pack a punch in the graphics department, a speedy 1Ghz processor, and the Super AMOLED display is just something you can’t find in too many places just yet. The only thing holding me back from taking the plunge is the UI. It’s a little too overdone, and a little too iPhone-esque for me. I’ll have a real opinion when we get our hands on one, which should be soon!

So what’s your take? Liking the Super AMOLED, or would you prefer a LCD screen?

The augmented reality app maker Layar has some mighty large ambitions, as the company just announced on its blog that...