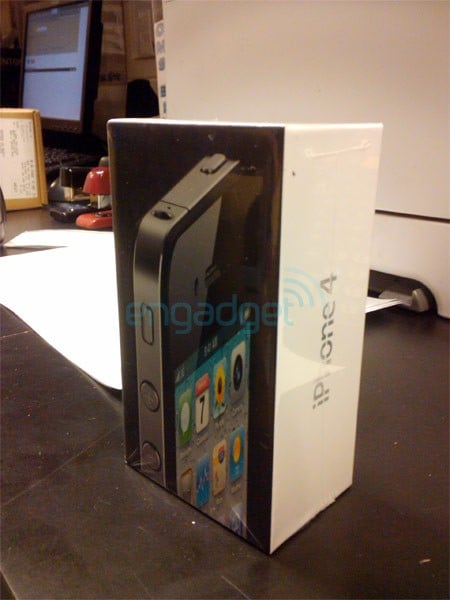 Woo hoo! The Apple iPhone 4 is already landing in some lucky owners’ homes but you can rest assured that the next Apple smartphone has arrived at big-box retailers like Best Buy (the photo above) and Wal-Mart.

We all know that the preorder demand for the iPhone 4 was tremendous and it looks like the supply at places like Best Buy. So, I’d expect a lot of people will have to line up to get one unless you have your preorder confirmation. Cheap plug: We’ll be lining up for the iPhone launch Wednesday night/Thursday morning and you can witness the madness through a live stream.

What’s all the big fuss about the iPhone 4? Well, I think this is the biggest hardware update Apple’s smartphone has ever gone through. The guts should be fortified because it is using the A4 chip, which also powers the fast iPad.

With devices like the Droid Incredible, EVO 4G and Samsung Galaxy S, the iPhone’s screen was looking kind of average. That won’t be the case with the fourth version of Apple’s smartphone, as it rocks the Retina Display. This screen packs 326 pixels per inch, which could give it the same visual clarity as paper, depending on how far you’re holding it away from your eyes.

The iPhone 4 is also the first to receive a major design revision, which looks good but could have a negative or two. The handset is thinner than any other smartphone on the market (Apple claims) and it should have a bigger battery. The trade-off is that it uses the micro-SIM standard, so you won’t be able to pop in your old iPhone SIM.

Additionally, the handset’s stainless steel band will also double as the phone’s antenna. This helps with the sleek design but, am I the only one concerned about your skin constantly making contact with a cellular antenna? I’m not going to go crazy like the lawmakers in the San Francisco, but some may find this odd.

Check out some hands-on video (in HD!) of the iPhone 4 after the jump.

We get all close and intimate with Apple’s iPhone 4 and brought our HD camera along for the ride.