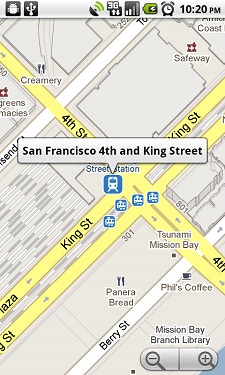 A cool new addition is the ability to quickly check out the upcoming schedules for public transit stations. This is probably more useful in certain cities (like mine) than others, but now you can find a quick list of the next departure times for trains, buses and subways. It’s not as good to look at as some of the other bus-tracking apps we’ve seen but it’s still cool beans.

The search giant is also trying to help Android users find information at a glance, as some search results in the new Google Maps will appear as color-coded bars giving you a visible representation of how positive these locations are being reviewed.

“Have you ever had to make a split decision for dinner plans while on the go? Now, you can see a snapshot of what people are saying about places right on search result pages,” Google said in its blog. “Instead of poring through full reviews, you can start by looking at what the most frequently mentioned aspects about a place are, such as food, service, atmosphere, or anything else people keep mentioning.”

This latest version of Google Maps for Android also has beefed up support for Latitude, the location-sharing service from Google. You can now quickly share your location with friends, as well as add friends in a quicker manner.

I think Latitude is the sleeping giant for Google, as the company recently released an API that will open this up to outside developers. I’m expecting content creators to take advantage of this in a big way because Google is already doing all the heavy lifting for the geographical database.

Google Maps 4.3 is available now in the Android Market for 1.6 devices and better.