After seeing Windows Phone 7 Series in Barcelona earlier this year, and then rejoicing at the decision to simply rename the operating system Windows Phone 7, we’ve all but lost much of the enthusiasm we once had when Steve Ballmer was in front of us, on stage, kicking ass and taking names. 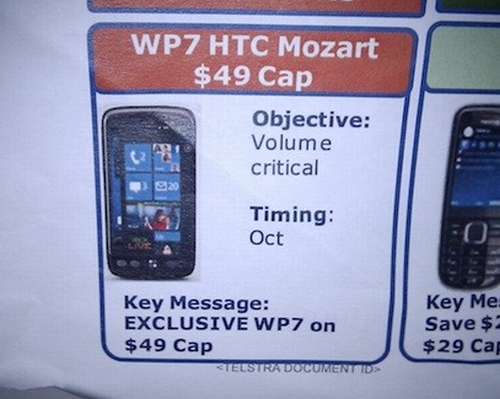 Since we first saw demos, the Palm Pre has come out … and failed. The iPhone 4 was announced, and will be shipping in the next few days. Nokia came out with … I suppose you can call the N8 exciting, but it’s just a really good camera attached to an ancient operating system, and it isn’t going to be available until October or November anyway. Samsung came out with their first Bada device. Sprint came out with the first WiMAX enabled phone to hit American shore. Google announced, and will soon be releasing Android 2.2 (codename FroYo). What I’m trying to say is that a lot of shit happened between February and now, and we still have the full month of July, August and September for yet even more shit to blow our minds.

With that in the back of your head, here is a small photo snapped from a leaked roadmap from Australian operator Telstra. It’s the HTC Mozart, and it’s going to come out in October. Wish we could tell you more, but we can’t.