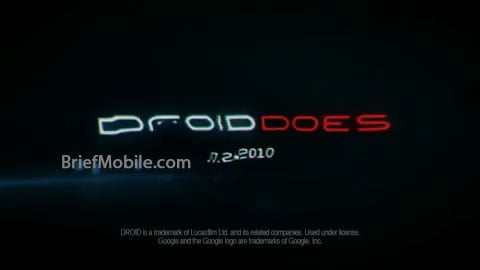 You may not have to wait long for the upcoming Android-powered Droid X, as some careful parsing of the teaser video reveals the massive handset may be coming out July 2.

The folks over at Brief Mobile noticed that at the end of the trailer there’s a slight flickering when the “07.2010” graphic looks like it says “7.02.2010.” This does make a bit of sense, as the time table is right on and the original Motorola Droid was also released on a Friday.

Why is this handset so cool that mobile geeks will study the teaser trailer like its the Zapruder film? Well, it looks like we’ll have to put Motorola’s next smartphone into our Superphone Shootout because it is packed to the gills with features.

It will sport a massive capacitive touch screen that will be at least 4.3-inches big (check out how it stacks up against the iPhone and EVO 4G). The screen will have the same resolution as its little Droid brother, which could be a disappointment to users expecting something like the Retina display or the Super AMOLED screens on Samsung handsets.

It’s a little unclear what will power this beast, as we’re hearing reports that Motorola’s next handset could have a 1 GHz Snapdragon processor. This is almost becoming the standard for high-end handsets but there’s also a chance it could rock a lower-powered OMAP chipset.

Expect an 8-megapixel camera that can record in full 720p HD video, as well as all the expected connectivity features (WiFi, 3G, Bluetooth, GPS). I’d be surprised if it retailed for more than $200 after rebates and a new, two-year contract with Verizon.

We’ll know all the hard specs and how this baby feels in the hand tomorrow, as we’ll be part of the unveiling of the next generation of Droid. We’ll have some gorgeous hands-on shots and some videos as well, so keep it tuned here.