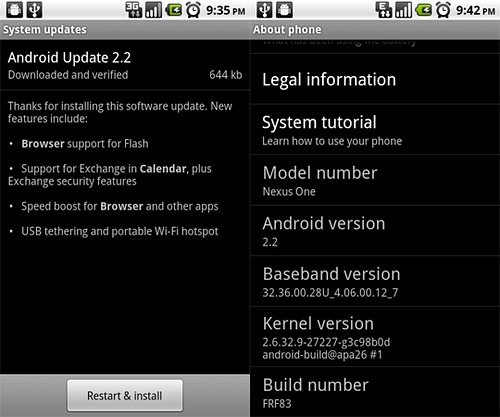 Google Nexus One owners, I hate you. Not only did Android 2.2, also known as Froyo, hit your handsets first, but you now have the final build available to you via an over-the-air update. Just a few days ago, an unofficial build hit and Google assured Nexus One owners that a more official update was coming. The search giant certainly didn’t waste any time because build FRF83 is here and it’s all yours to enjoy.

It’s no surprise that the update came when it did since the Froyo source code was made publicly available less than a day prior to the update. You can download the update from Google now, but only if you’re coming from build FRF50 and not FRF72 which was leaked not too long ago. Or you can grab the update OTA by going into your settings and checking for updates.

If you choose to update now, let us and your fellow readers know how well it goes for you!

Verizon hiding Motorola Droid X units all across the country?

If you missed the Droid X's teaser ad a couple of days ago, we suggest you check that out before...