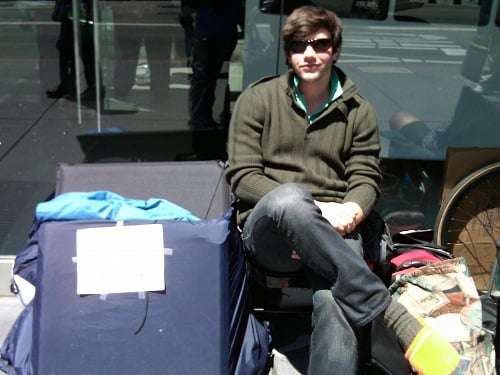 If you thought we were crazy for lining up for the iPhone 4 (live stream’s going strong, folks), get a load of Chris Bank: he’s been in front of the main San Francisco Apple store since Monday night to be first in line for an iPhone 4.

Bank said he’s been a long-time BlackBerry customer (he rocks a Bold) but he said the display, multitasking and redesign of the next iPhone were enough to sway him.

“I’m just starting to get into Apple products and I’m a big believer in how they approach the user interface,” Bank said.

He chose this specific Apple store because it is one of the few that will have units available on launch day for those who didn’t preorder. We know that AT&T will be stressed for supply due to the preorder demand, so you may be out of luck on launch day if you haven’t preordered one.

So, I hit him with the hard-hitting questions, so you’ll be happy to know that he uses the Apple store bathroom until they close and then he holds it until the store opens in the morning.

He also has a few power bars, coffee mixed with chocolate and other goodies for sustenance. He’s also an independent technology consultant for start ups, so he has been able to carry on his work from line with his MacBook and has even scheduled appointments in line.

Thanks to the potential shortages of iPhone 4 units, we may start seeing handsets sell for a lot on eBay (just like the iPad did). Bank has secured the front spot at the line and will sell it to the highest bidder. 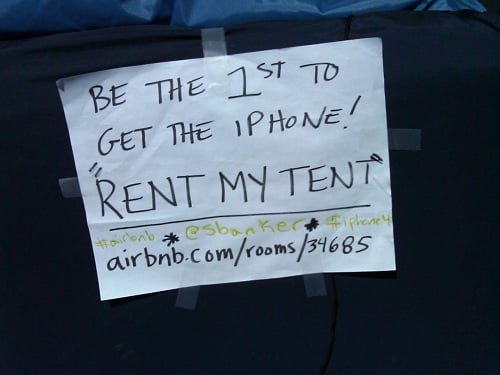 So far, he said he’s exchanged a few e-mails with interested parties and the spot could fetch up to $300.

So, are you readers going to get an iPhone 4? Watch our live stream of the launch and those of us not in line will probably pop in the chat room or do some live streaming.