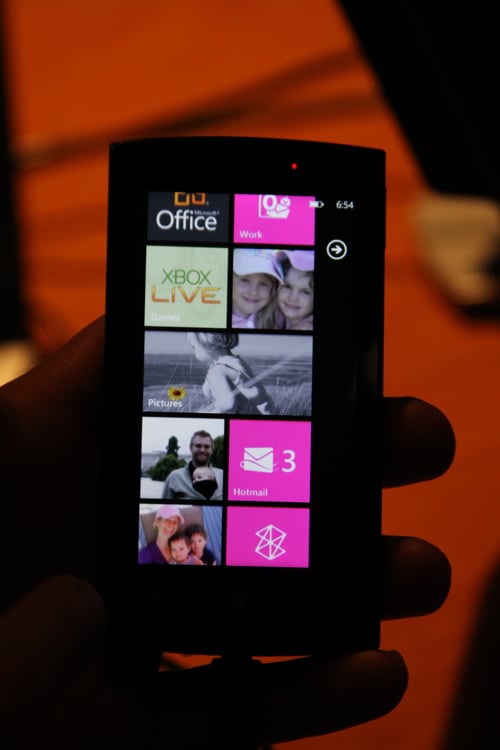 We were at Microsoft’s soiree in New York City last night and caught a deeper glimpse at Windows Phone 7. The yet unreleased mobile operating system doesn’t look like the most intuitive platform out there, but it’s still in the works and getting cleaned up. Microsoft was careful to tell us that the OS was running on pre-production hardware, and we did notice that it was unbranded, so we didn’t focus on the device itself as much as the platform.

You’ll find that the UI is very clean, contrasty and colorful, and parts of it remind us of what we’ve already seen on Windows Phones like the Microsoft Kin One and Kin Two. Another little reminder on the screen was that the device was running on AT&T’s network, so we’ll take that as a sign that Windows Phone 7 could be competing directly with the iPhone on the same network.

At the event, we got a closer look at the social networking integration along with a thorough demo of the OS’s contacts and calendars system. The calendar looks spiffy with multiple colors separating the different types of calendars, although it does look a little confusing at first. It seems like the set-up will definitely take some getting used to. The contacts add social networking statuses and images so that everything you could want to know or see about that contact is all in one place.

Overall, we came away neither impressed nor disappointed, but curious. We just want to see what the new phones will be like and just how well the Windows Phone 7 platform takes off. It will have to wow a lot of consumers in order to steal mind-share from the iPhone and Android platforms, as well as webOS as it has new pieces of hardware on the way. It should be an interesting year for Microsoft!

To see a more in-depth look at Windows Phone 7, see the video we took at the event down below.