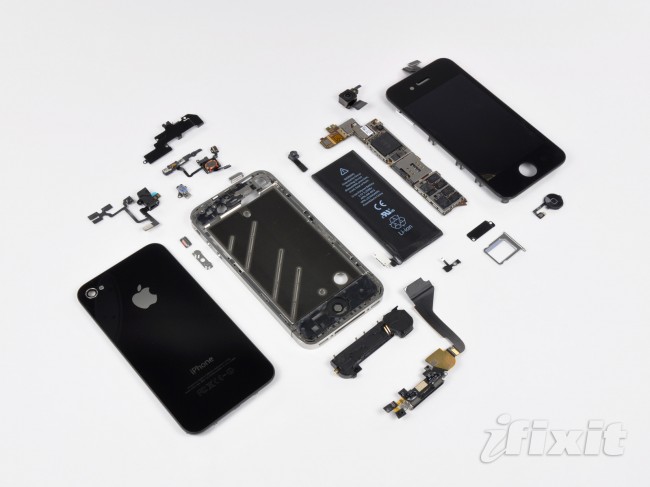 The iPhone 4, which goes on sale soon, has been disassembled for our viewing pleasure. There are quite a few interesting things about the iPhone 4’s insides; for one, the LCD screen is glued right against the front glass screen, meaning if you break the screen, the whole display (rather than just the protective glass) will be busted. From earlier tests, we’ve seen the iPhone 4 can survive 3-5 drops from waist height, which probably won’t be enough for most folks – get a bumper! Disputed specs like the 1GHz clock speed of the ARM Cortex A8 processor and 512 MB of RAM have been confirmed. For those worried about the 1420 mAh battery, it is apparently pretty easy to replace and not soldered in place like previous models.

If you somehow haven’t heard, the iPhone 4 is Apple’s latest and greatest handset, boasting the highest-resolution display we’ve seen on a smartphone to date. The iPhone 4 is launching with iOS 4, which finally brings multitasking to the party, and brand new to the iPhone family is video calling enabled by a forward-facing VGA camera. Of course, the rear-facing 5 megapixel camera with LED flash has produced some exceptional samples so far. Check out our hands-on video, pictures, and impressions of the iPhone 4 for a closer look.

Here are a few pictures showing some of the iPhone 4’s inner-workings, but hit up the via link if you’d like to see the full disassembly process. For those interested in drilling even further down, there’s an associated chip analysis that goes over all of the technical nitty-gritty.