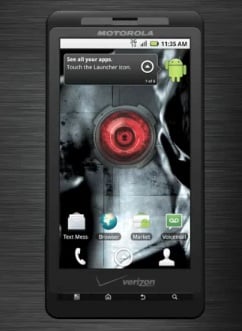 If there’s been any clamoring in the mobile world that’s NOT about the iPhone 4, it’s undoubtedly about the Droid X, and Verizon has officially launched an introduction video for the device.

We already knew what to expect from the Droid X through rumors, and today’s official announcement told us a lot of what we already know – 1Ghz OMAP processor, 8-megapixel camera, HD 720p video recording, and that 4.3-inch multitouch display. The video shows how the device shines, going through all it’s major features with some unneeded commentary, such as:

Friends will stare in awe as your High Definition masterpieces shine like the sun on virtually any HDTV.

Now that the video is live, there’s a very good chance that other ads will start flooding your TV soon. Motorola’s Droid X push could very well exceed the hard marketing campaign that we saw with the original Droid, and for good reason. Although it’s not much of a leap from the Droid Incredible, the X (and the upcoming Droid 2) absolutely demolish Verizon’s first Android phone. Smartphones have come a long way in such a short time – Motorola’s first Verizon Android phone is less than a year old, but has become pretty much obsolete since it launched last year.

With a handful of the best smartphones today now sporting 1GHz processors, having a phone that’s not even a year old can start to look a little depressing. If I was to make the switch within the next few months, I’d either go for the Samsung Galaxy S (Vibrant), or the Droid X. My Nexus One is all the phone I need right now, but even I would like features like an HDMI-out port.

Give me a device with an EVO-sized screen, a resolution similar to the iPhone 4’s (I don’t care about the Retina Display, just give me something better than a 854 x 480 resolution), with a Super AMOLED display from the Galaxy S, and Android Gingerbread, and we’ll talk.

Manufactures, anyone wanna make that for me? Thanks.

We were at the event held this morning by Verizon, Motorola and Adobe this morning for the introduction of the...