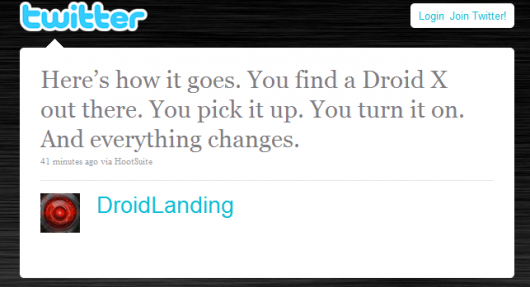 If you missed the Droid X’s teaser ad a couple of days ago, we suggest you check that out before reading ahead. @DroidLanding, the official Droid X Twitter account, posted a tweet today that leads us to believe that Verizon may be hiding Droid X’s all over the country.

If you started following @DroidLanding, you may be familiar with this already, but it looks like some “Droid X’s have escaped“, and if you turn out to be one of the lucky few that happens to stumble across one. DroidLanding has been tweeting clues since the Twitter account was discovered on the 21st of this month, but many of the “clues” aren’t necessarily that helpful. The last one in particular (above) really doesn’t help anyone out as to where those secret Droid X units may be hiding, for example. So, unless Verizon plans to update their posts with more specifics, Droid X’s could just be sitting on the side of the street waiting for anyone to pick it up.

That’s fun and all, but the lack of real clues makes it less of a game for people who’d like to be a part of this slightly cultish contest. It’d be cool if they update the Twitter account with some coordinates, and let the race begin.

I’m just hoping they have hidden one somewhere in San Francisco, possibly in the Mission district. According to one of the Tweets, more than a dozen Droid X’s have “landed,” and are waiting to be plucked up. Whether or not we’ll be getting anymore information on location remains to be seen, but let’s hope followers of @DroidLanding get some sort of head start.

For those looking to shell out $200 for the thing, this may be your only, very unlikely chance to pick up a Droid X for free. You’ll likely still have to sign up for a two-year contract, but at least it would be to the nations most reliable carrier. If you haven’t started following DroidLanding, we suggest you do, and happy hunting!

If there's been any clamoring in the mobile world that's NOT about the iPhone 4, it's undoubtedly about the Droid...