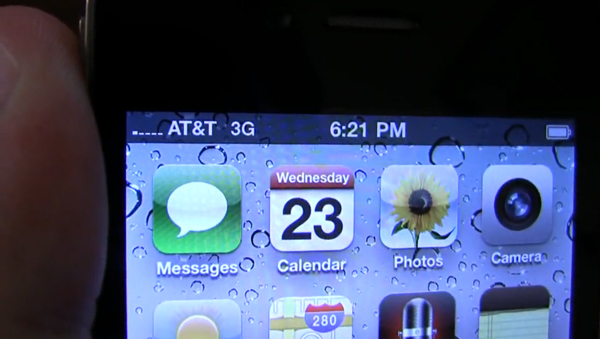 Nothing brightens my morning more than finding out that Apple’s latest revolutionary, magical, pixie-dust-farting device (in this case, the iPhone 4), has some massive design flaw that potentially undermines its core, basic functionality. Oh, you haven’t heard? Well! Remember how the iPhone 4’s outer band that connects the top and bottom glass plates was actually set up as the Bluetooth, Wi-Fi, GPS, and cellular antennae? As it turns out, if you bridge the two sides, reception on some handsets drop off to nothing. I’m no engineer, so can’t comment on why that’s happening, but it’s been a consistent and reproducible error on several iPhone 4s. Check out this post for a bunch of videos demonstrating the problem.

To be fair, you have to be holding the iPhone 4 a pretty specific way to get the problem and a bumper seems to fix things. Besides, there are still a lot of great things about the new iPhone 4 which offset the bug, like the impressive 960 x 640 display, high-res 5 megapixel camera with flash, the new iOS 4 with multitasking, and more apps than you could shake a black turtleneck at.

So, let’s find out just how widespread this reception problem is. Hit up our poll and let us know about your reception situation with your shiny new iPhone 4. It’s entirely possible that this only affects a small proportion of vocal iPhone 4 owners – after all, four of the IntoMobile guys and three of their friends didn’t have any problem, but even if they were, I’m sure Apple would be happy to do a switcheroo. After some wrasslin’, our guys managed to replicate the Death Grip.

The irony that one of Apple’s biggest innovations in the iPhone 4 also turns out to be one of its biggest problems still tickles me pink, although it’s a little tragic considering how much other great stuff is going on with the device. Still want to get an iPhone 4, lines and reception risks be damned? Check out our hands-on impressions and unboxing first.

[Update]
AT&T issued a statement to GearLog about the alleged reception issues. Their “fix” is apparently to stop holding the phone in “certain places” or to use one of the “many available [iPhone 4] cases.” Full statement:

Truphone for iPhone updated to sing along iOS 4

Truphone announced that their iPhone app has been updated to support iOS 4. And it's not just the under the...