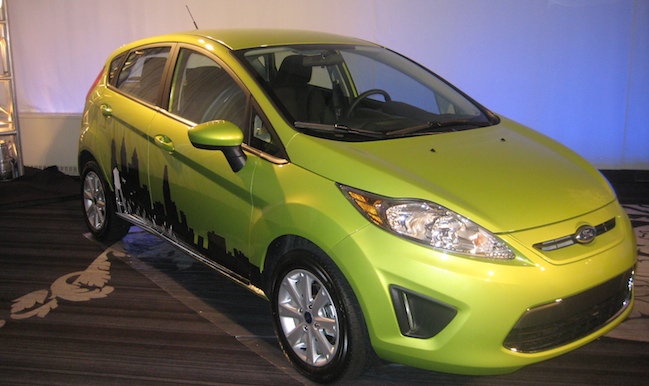 Earlier this week, I was invited by Ford to check out some of their new upcoming vehicles, as well as take a sneak-peek at the new SYNC AppLink.  Ford debuted this technology earlier this year at CES, but now they’ve got a snappy new name for it and trusted developers have had 5 months of work to put into their apps to function with AppLink.

The first app that was demoed was Pandora.  When the Ford SYNC’s AppLink is connected to your mobile device running Pandora, you can access all of the controls you normally would input through the Pandora app through SYNC.  The driver would push the ‘Push-To-Talk’ button, SYNC would then prompt the driver with a “Pandora” prompt, indicating that is what the vehicle is currently running.  At that point, the driver would speak the command, such as Skip, and SYNC will perform the command in Pandora.  Pandora streamed its content directly to SYNC through Bluetooth and worked absolutely flawlessly.  Pandora can also be controlled from the dashboard as Ford allows developers to map dashboard inputs to their apps.

The next app that was featured was OpenBeak, which if you recall was originally called TwitterBerry, but received a rebranding late last year.  OpenBeak allows the driver to keep up to date on their Twitter addiction by reading aloud their timeline, friends’ Twitter feeds, as well as direct messages.  Unfortunately, during the demo, the application was downloading the Ford representative’s timeline, which he said would take 20 minutes to download.  This had me thinking how convenient OpenBeak on SYNC would be if it takes 20 minutes to download a Twitter users timeline.  To be fair, the Ford rep told me he had unread messages from a couple of months back, which is probably why it would take long to download his Twitter feed.

The last app that was featured, but didn’t receive any demo time was Stitcher.  For those who may not know, Stitcher is similar to Pandora, but instead, the app only deals with talk radio stations and is the #1 audio app in the news category of the iTunes App Store.  My assumption would be Stitcher would perform just like how Pandora would.

SYNC’s AppLink is certainly getting off to a good start, but the only worthwhile app seems to be Pandora.  OpenBeak seems like it’ll help the driver stay connected to their Twitter feed while they’re driving, but one of the main aspects of Twitter is missing: Being able to tweet your own messages.  Hopefully OpenBeak’s developers can iron that feature out before AppLink is released.  I’m hoping when AppLink is launched on the 2011 Ford Fiesta, app developers will see what’s possible with the service and want to offer their apps to be used with SYNC’s AppLink.

[Update: A Ford representative informed me of what occurred with OpenBeak.  At the time I was being given a demo, the Blackberry that was being used to demo OpenBeak was receiving a software update, which is why I was told it would take 20 minutes in order for the timeline to be accessible.]

Will the Apple iPhone 4 Blend?

If you love your Apple iPhone 4 more than your own family members and friends, be warned: the following video...