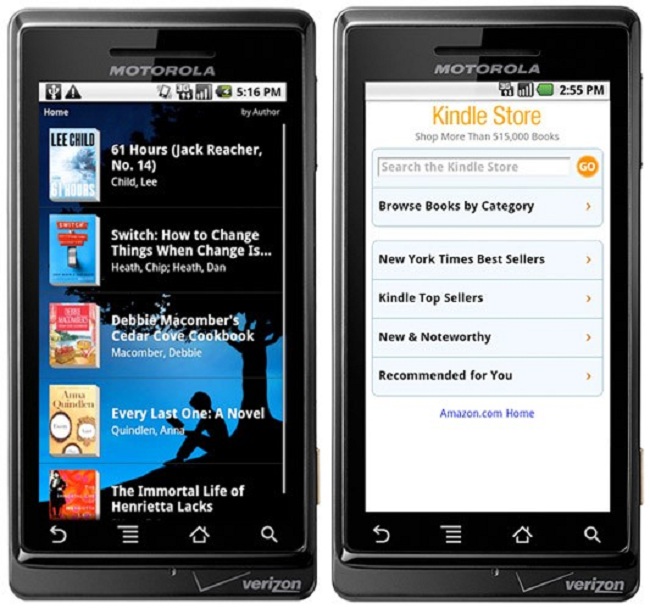 After months of anticipation, Android owners can now get their reading on as the Amazon Kindle app is live in the Android Market for 1.6 devices and higher.

The Kindle app lets you read and buy books from Amazon’s digital book store. If you have the e-reader, you’ll be able to sync it with your Android phone so you won’t lose your place.

The app also lets you add bookmarks, adjust text size and read in landscape or portrait mode. It shouldn’t be much of a surprise but this also includes touch support for flipping through pages.

Amazon said the Kindle newspapers, magazines and blogs are not available on the Android app for some reason, but that should be coming soon. There are other alternatives for finding newspapers on Android, however.

Some little green robot owners may feel like they’re getting the short end of the stick, though, as the iPhone app has been available for a long time. In fact, Amazon is adding video and photo elements for the iPad version.

With Google mobile platform expected to be on a ton of tablets in the near future, I’d expect these advanced multimedia features to come to the Android version but who knows how long that will take.

It does make sense that Amazon is targeting iOS first, as it has more users than Google’s platform. Additionally, Apple is trying to push out its own Kindle competitor with iBooks.

The iBooks app debuted on the iPad but it is now available on the iPhone and iPod Touch. While it doesn’t have the same library as Amazon (excluding ePub and PDFs), it does a prettier user interface.

I’m not a huge e-reader fan (too busy reading IntoMobile, of course) but this healthy competition should lead to better products for all of us. Sound off in the comments on your favorite e-reader or some titles, too.

We know that Android 2.2 (Froyo) is set to hit the Motorola Droid sometime in late July, and as it...