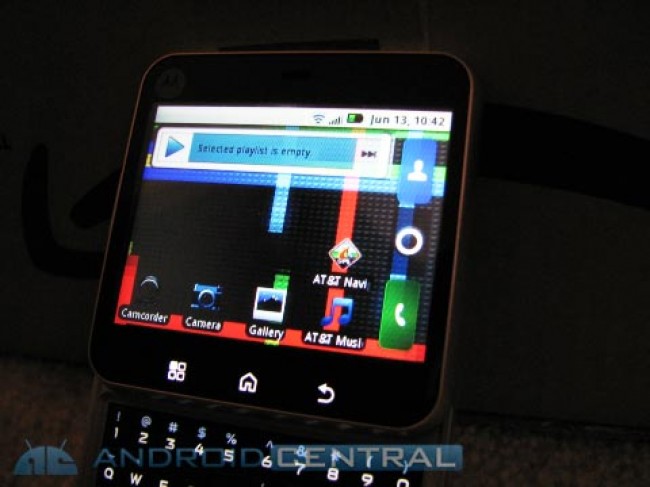 Oh, AT&T … Why do you have to do this to your customers? With the introduction of the HTC Aria and Captivate, I really thought the carrier would have stopped releasing sub-par devices. If this picture has any truth behind it, (why someone would want to fake something so lame is beyond me) then we may be seeing the Motorola Flipout coming to AT&T soon.

If you’ve read my Motorola Backflip review, you already know what I think about Motoblur, and that’s exactly what the Flipout has running on it. The picture of the Flipout above is showcasing two very specific application on the screen, of which both are from AT&T.

If that’s not an indication that it will be headed AT&T’s way, I don’t know what is. The Flipout looks to be a smaller Backflip with a different way to access the keyboard. Basically, the screen rotates in a 90-degree angle which reveals the keyboard, hence “Flipout.” It’s more of a rotating-slide mechanism, but you get the point.

One thing that the Flipout has that the Backflip lacks is Android 2.1, and “Enhanced Motoblur”. Cool, it’s sporting a more recent of version of Android, but this Enhanced Motoblur business doesn’t make me think it’s going to help.

One of the features I’ve seen on the newer Motoblur is that you can resize widgets right from the screen, it’s actually pretty nifty, and by the looks of the screen, you’re probably going to need to size all your widgets down a bit. While I will continue to bash Motorola’s low-end devices, I must say – as small as the keyboard on the device is – it looks like you could probably bang out a decent amount of e-mails on it. While it looks maybe a little small and cramped, it would probably be a breeze to type with your thumbs on, even if it takes a little bit to get used to.

While the Motoblur-looking skin on the Droid X has undergone a nice overhaul, Motorola’s skins on other devices just looks too busy, too annoying and toy-like.

I understand that manufacturers want to differentiate their devices that have the same software as many others flooding the market, but they could have made it look a little nice, which Motorola has proven it could do with the Droid X. Come on, Jha!

Yikes. After pushing out an over-the-air update for the Android-powered that seemed to brick some EVO 4G units, Sprint and...