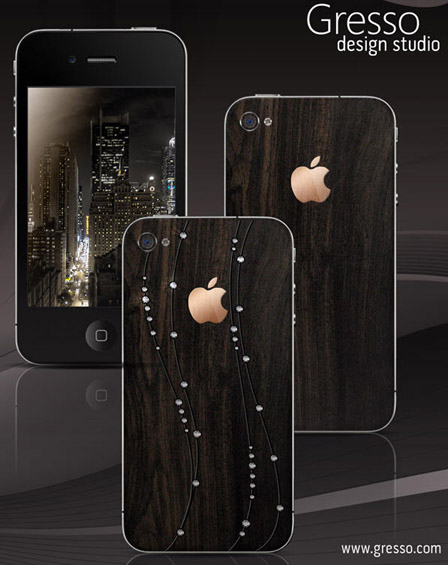 With Apple moving the iPhone 4 units at a record pace, soon every kid in the block will own one. Nouveau riche of this century doesn’t like the idea of having the same device as their neighbourhood does, hence companies like Gresso are addressing the “needs” of the mentioned rich folks.

Making a limited luxury edition of every iPhone model is a common sense turned common practice these days. Gresso doesn’t want to miss the boat, hence they’ve announced a special version of the latest (and greatest) iPhone 4. The plan is to customize the device with 200-year-old African Blackwood for a case, and 18-karat gold for the Apple logo on the back.

There will be two devices available, one for ladies which also rocks “dainty engraving and Swarovski crystals incrustation” and could be yours for $3500. On the other hand, Gresso’s men version lacks the mentioned crystals and is thus $500 cheaper.

These special iPhone 4 versions will start selling in December. If you can’t wait, there’s will be the same kind of iPhone 3GS available in July…

Android-based OPhone 2.0 platform debuts in Beijing with the launch of Samsung Oscar I7680

Android-based OPhone platform for China is hitting the version 2.0 with the launch of Samsung Oscar I7680. We're not sure...