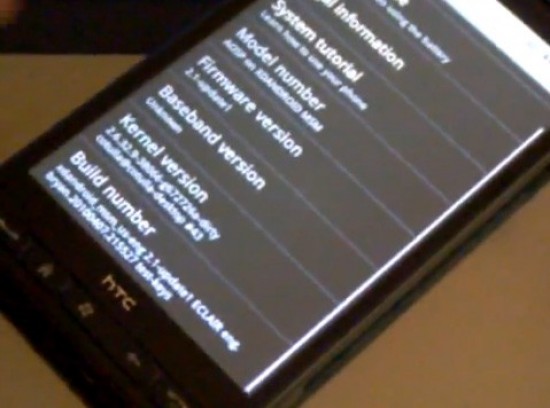 One of the most desirable things many people would like to see on the HTC HD2 – the Windows Mobile-powered brother to the HTC EVO 4G – is a full-fledged port of Android. We know they are working on it, but this time around, we’ve got a video of it in action, and Ubuntu decided to come along for the ride.

One of the main issues we’ve heard about porting Android OS to the HD2 is that the touchscreen is not compatible, but from the video below it looks like the touchscreen is working just fine. The HD2 is running Android with a custom boot animation, cleverly named XDAndroid, but the build still has some work to be done.

During the video, Android crashes, at which point you can see Ubuntu running on the device. While that’s cool to see, the person in the video is struggling to get the mouse pointer pointed at the correct spot, and it looks extremely frustrating. Nonetheless, this video shows a lot of progress from previous status reports.

When Android is ported over to the HD2, and I have no doubt that it will eventually be ported, the device may not be HTC’s ugly duckling anymore. The device sold quite well, with T-Mobile selling out of the device multiple times, but there’s only so much you can take with Windows Mobile running the show. Even with HTC Sense running on top of the stock homescreen, Windows Mobile manages to find a way to sully the HD2 experience a bit.

Android ported to the iPhone is more of a “haha” to Apple. The iPhone OS is just fine on its own, if not a little boring. In contrast, Android on a Windows Mobile device is simply needed. There’s not much hope for the old Microsoft mobile operating system, especially if current Windows Phone devices won’t get an upgrade to Windows Phone 7. Android on the HD2 will be a breath of fresh air to users, if they are willing to get down and dirty with some hacking.

Windows Phone 7, you really can’t get here soon enough, as those who may be considering one of the new WP7 devices may end up being swayed by Android or iPhone. Let’s hope that Windows Phone 7 delivers where it should so that it won’t end up like the KIN.

Check out the video below after the break!