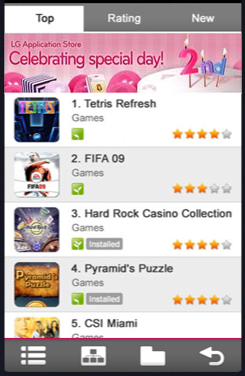 LG’s Application Store launched last summer for Windows Mobile devices, and today announced that on top of a facelift to their site, they’re spreading to Android before the end of the year.

I’m still a little confused why anyone other than the platform developer would make an app store and expect it to fly, especially in Android’s case, where Google has done a pretty good job populating and managing the Market. The only situation I could imagine is that LG’s app store would offer some space for carriers to push their own wares, but even then, I’m not sure if it’s being used in that capacity at all, since the LG Application Store has yet to be localized for the U.S., Canada, or anywhere in Europe. At best, the LG Application store would allow developers to pump out apps to multiple platforms (Windows Mobile, Android, and feature phones), at the same time, so long as they’re cool with solely targeting LG handsets.

As far as selection goes, the LG Application Store boasts “over 3,000” apps, which is really a pittance considering the official Android Market is more than 70,000. More power to LG for taking some control of their hardware, but I think they’re going to have a hard time competing with Google for the eyes and fingertips of app-hunters.