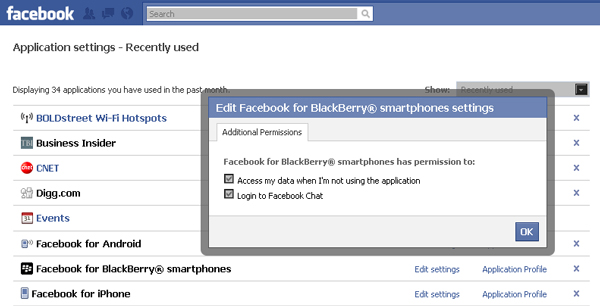 An innocuous Facebook user was poking through application permissions and found that the Facebook for BlackBerry app asked for permission to log in to the instant messenging service, even though it doesn’t offer mobile chat. RIM’s certainly no stranger to IM clients, having built AIM, ICQ, MSN, and GTalk apps around a similar and reliable framework. Producing a Facebook chat app may be a bit more involved, since the existing social networking app already has a lot of hooks into the native BlackBerry address book and calendar, but it’s well within the realm of possibility, especially considering third-party IM clients can already do it.

Of course, there’s no way of telling just how far along RIM is in releasing Facebook Chat for BlackBerry, but they haven’t updated the app in awhile, so it would be only fair if something came out soon.

For the last couple of days, I suspect many of you were going through World Cup 2010 withdrawal. Thankfully, this...