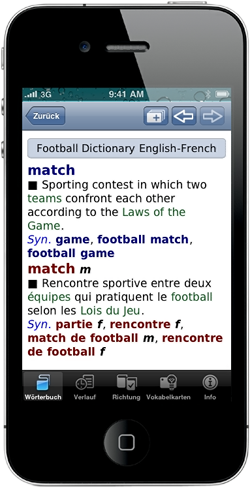 For the last couple of days, I suspect many of you were going through World Cup 2010 withdrawal. Thankfully, this morning quarterfinal play has started up, and as I write this the Dutch are taking on the Brazilians in the first match of the day. With that in mind, I thought the ‘footballers’ out there may want to check out a new app for iPad, iPhone and iPod Touch from Paragon Software Group and Langenscheidt.

They’ve just released a mobile version of the UEFA Football Dictionary. The app works just fine and dandy on the iPad, iPhone and iPod Touch, and provides definitions and translations to over 5,700 terms, in the three official UEFA languages (English, French and German).

I have to assume this app is for the hardcore football fan only, as it will run you $15.99 USD at regular price. As a special launch promo however, the UEFA Football Dictionary is on sale for $11.99. For all the details hit up the app store link below, or keep reading after the jump for the press release.

FREIBURG, Germany – July 2, 2010 – Paragon Software Group, a leading software developer for mobile devices and desktop computers, and German reference book publisher Langenscheidt announce the release of the mobile version of the UEFA Football Dictionary for iPhone/iPad /iPod touch.  The unique reference source provides trilingual translations or monolingual word definitions in three official UEFA languages – German, English and French – of all terms related to football.  From official terms used by the international governing bodies of soccer to common terms of interest to football fans the world over, translating all aspects of the games in three major world languages is conveniently handled in one mobile application.

The dictionary contains about 5,700 terms relating directly to the game and its plays, and also includes terms for special-interest subjects such as stadium and security, equipment, medical matters, media matters, and management and administration.  Each term is defined, with an explanatory note, example, synonyms and cross-references where applicable. This reliable and authoritative dictionary helps facilitate multilingual communication both on the field and on the sidelines.

If you're simply standing by to get your hands on a cheap iPhone 3G or 3GS at one of Canada's...