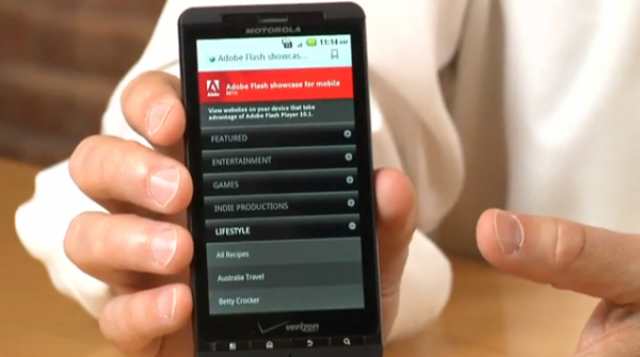 The Verizon Motorola Droid X isn’t even out yet, and we’re already seeing Adobe’s Flash 10.1 Player for Android running on the device. That should be exciting news to anyone that managed to get a Droid X pre-order. We still wish the device would ship with the Android 2.2 (Froyo) OS that is required to run the Flash player from Adobe, but by the looks of it, the Froyo update may not be too far off.

The video below shows off the Android Flash 10.1 Player running on the Droid X, and while it’s nothing we haven’t seen before, Flash sure does look nice on the device’s massive 4.3-inch display. A couple of games are shown off, as well as a Flash-based World Cup app, all perfectly sized to the X’s screen, and running quite well. While it’s nice to see this on another device other than the Nexus One, we’ve seen this before and we just want it on the device already. Patience is a virtue, some say ,but in the tech world, a longer wait might just make potential customers reconsider their options.

With a little over a week until the Droid X is available, ads starting to show up, and a country-wide scavenger hunt, the device has a growing underground following behind it. Still, all the fervor surrounding the X has yet to hit the mainstream. Verizon needs another large push, as they did with the original Motorola Droid to get the X in the minds of the average consumer. It may have to put in a little less effort, as the Droid line up is definitely indelibly burnt into many minds, but the competition is the hotter than ever, so Verizon should really deliver on the advertising front.

Though we can expect Flash on the Droid X by late summer, whether you like it or not, showcasing the capability would probably go over well in one of Verizon’s advertisements. Unfortunately, we may have to wait for the Droid 2 before we see that.

Are you wondering why your iPhone app is showing you Justin Bieber ads? Well, it looks like Apple iAd -...