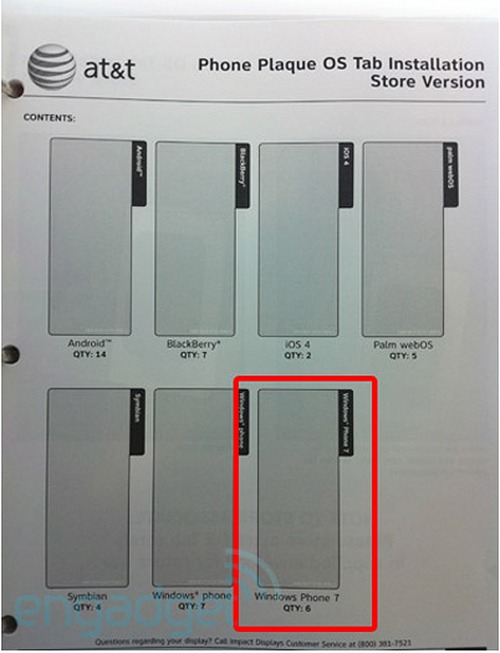 Everyone is getting pretty excited about what Microsoft has in store for Windows Phone 7 and the handsets that will come along with it. So far, we’ve come to expect that the new WP7 devices will be launching in October in the U.S., but it looks like there is a chance that devices may become available a month earlier than that. This is good news if it pans out for those who have been holding off on the hot line-up of Android devices or the iPhone 4 to get their hands on Microsoft’s newest operating system and hardware from its partners.

Word is that, according to leaked AT&T retail signage, the Windows Phone 7 devices could be as early as September. Along with the launch could come a store signage change, too, to reflect the new line of handsets from Microsoft. So, just what can we expect this coming September? According to reports, we may see a handset coming from both LG and Samsung, and based on what we already know about the three chassis that are required for WP7, and demo units we’ve seen so far, we can get a pretty good idea what these handsets will look like and what they’ll deliver.

On the other hand, we also saw the HTC Mozart as possibly being one of the first Wp7 phones to hit the market. The Mozart is supposed to be for Telstra in Australia, who is expected to launch its Microsoft WP7 device in October. Only time will tell who gets to call themselves first in getting the first Windows Phone 7 device out to the masses.

The sooner, the better for Microsoft, who seems to be playing catch up in terms of the mobile space. After seeing Windows Mobile dwindle down into oblivion, and the clear failure of the Microsoft KIN phones, timing is getting even more crucial if the software giant wants to compete in a highly saturated and extremely competitive market.

There's been a handful of ways that users have been able to achieve root access on the Sprint HTC EVO...