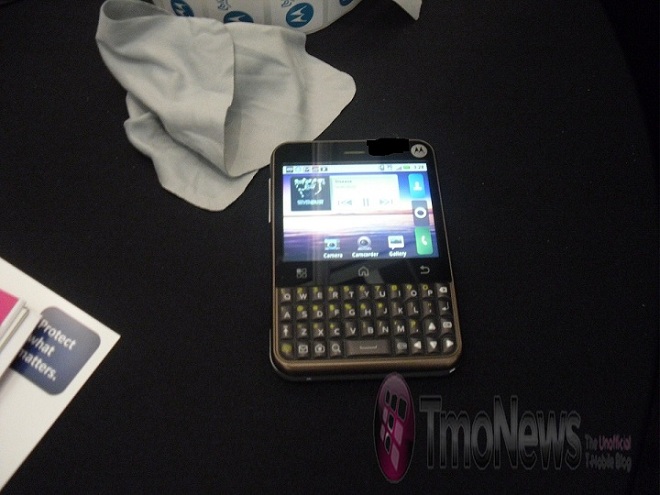 It looks like the Android-powered Motorola Charm isn’t too far away from release, as a tipster was able to nab this photo from a retail package shipped to a T-Mobile store.

The Motorola Charm is an odd fellow, as it looks to have a small, short, squat form factor. I guess it could be best described as a quick-messaging device that could be appealing to text-happy teens but that screen (which probably can’t be bigger than 3 inches) just looks too small. What’s more, the Motorola Charm will be rocking MotoBlur – this custom Android user interface has typically had a space-eating tendency with its widgets, which could make this screen even worse.

Still, the handset is expected to rock Android 2.1 and we’ve heard rumblings that T-Mobile will offer this smartphone for free on a new, two-year contract. While we know very little else about the device (processor speed and on-board memory remain a mystery), this could be a solid device for budget-conscious users.

There’s also a chance that it could have that weird touch panel on the rear end like the Motorola Backflip, but I found that thing pretty odd to use. T-Mobile will undoubtedly give us full specs and details when it makes the device official and you can be sure we’ll be on top of that.

As Motorola is preparing to split into two independent companies, I hope the one-time mobile pioneer focuses more on devices like the Droid X than the Charm.

The Verizon Motorola Droid X isn't even out yet, and we're already seeing Adobe's Flash 10.1 Player for Android running...