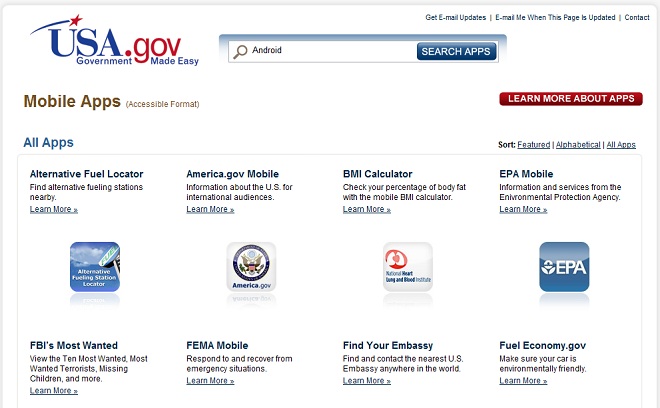 The U.S. government has launched a website that aggregates all the official mobile applications that come from governmental entities. While the site is primarily filled with iPhone apps, it also has programs for Android and BlackBerry.

What kind of apps can you expect from your federal government? Well, there are a variety of programs, including the FBI’s Most Wanted app for Apple iPhone. According to the description:

A picture and background information is provided for each individual. The application also provides a link to submit tip information directly to the FBI.

This application allows you to quickly identify Most Wanted criminals or missing children. Additionally, it provides the means to submit a tip, conveniently from your iPhone or iTouch device while you are on the go.

You have to love the government: on one hand, you applaud the tech-savvy nature of these apps and the site itself but you can just tell something’s off. For one thing, there’s no such thing as an “iTouch device” as it’s either the iPod Touch or the iPad. I’m just haggling over semantics though.

Other iPhone, Android and BlackBerry apps in the store include offerings from NASA, FEMA, the United States Post Service, the Veterans Affairs office and more. There’s even a neat program from the National Renewable Energy Laboratory that helps you calculate your gas mileage, as well as the carbon footprint information for your vehicle.

Taking a step back, the introduction of this program shows how important mobile apps are becoming in the mainstream. That also means that it should become big business, as a recent report suggests the mobile app market will generate more than $4 billion in revenue in a few short years.

What’s even more important to me is that we’re finally getting to the stage where these mobile apps can have a significant boost to our real-life problems. I’m glad to see the government partially understand that.

It wasn't that long ago where T-Mobile didn't even have a 3G network but the fourth-largest carrier in the United...