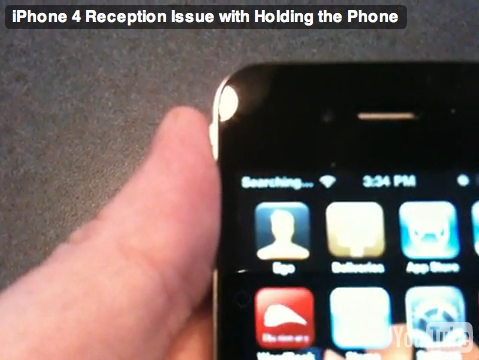 The iPhone 4 drama continues as some frustrated users are looking for relief from the antenna problems with a new update. AppleCare says otherwise. Since launch, in case you’ve been living under a rock, many iPhone users have been seeing some huge drops in reception and highly attenuated data speeds when the antenna is touched a certain way. Essentially, holding the phone in such a way that touches the area where the steel frame meets at the lower corners causes the problems. Steve Jobs asked us to stay tuned and shortly after, we were promised an update that would fix things. Not so.

It turns out that the update, which only serves to correct the way the iPhone 4 displays signal strength, won’t be fixing the antenna issue at all. Why anyone thought a software update could fix an inherent hardware problem is beyond me, but iPhone 4 users are surprised either way. Gizmodo got the lowdown from AppleCare:

• One solution is to hold the phone differently, avoiding to touch the left bottom corner of the phone (coincidentally, this is how models hold the iPhone 4 in most of Apple’s promotional material).

• The other other solution is to buy a case or one of Apple’s $30 bumpers (we are hosting a petition to ask Apple for free cases. You can sign it here).

• The incoming software update will not fix this antenna problem, only change the way the phone displays the available signal, make it more accurate.

Are you surprised? You shouldn’t be: Apple and AppleCare have been saying these things repeatedly ever since the antenna issue was brought to light. Giz reader and engineer Gordon Cook told the blog in an e-mail:

“Wrapping a metal antenna around a phone is simply asking for trouble, and Apple may in fact have realized too late that they had a real can of worms, so chose to release what they had instead of enduring a lengthy shipping delay. Now, after millions of phones shipped, and given the alternatives, screwing with the software is the only realistic way of fixing this, even if it’s mostly cosmetic.”

What’s depressing here is that Apple’s supposedly brilliant design turned out to be the new iPhone’s biggest folly. But can anyone really be shocked? I remember nearly 20 years ago when I had a radio with one of those long, retractable antennas and just how much my tunes would be affected every time I’d touch or grab the damn thing. Clearly, Apple’s iPhone 4 engineers are brilliant, and I’m not saying they didn’t think of this, but it sure does seem like they ignored a huge problem in order to keep the smartphone super thin and sleek. So it goes.

This morning we've got a trio of videos showing the breadth of RIM's immediately upcoming BlackBerry lineup, featuring the 9800...