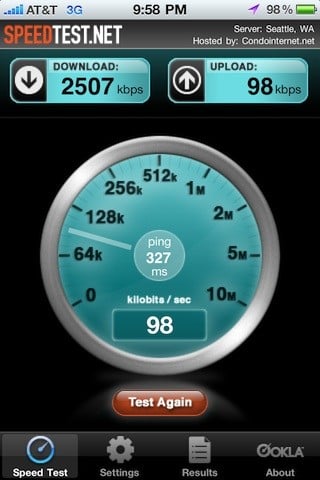 Remember when we thought AT&T was trying to pull a fast one on us by throttling upload speeds in certain regions? It turns out that it was a software bug that is now being worked on by the carrier and Alcatel-Lucent who provides some of the equipment and software that AT&T uses for its infrastructure. The carrier is sort of blaming Alcatel-Lucent for the issue, as it naturally tends to shift focus off of itself most of the time, for the recent snail’s pace upload speeds users were seeing in some areas.

According to AT&T, the issue was limited to very specific conditions that affected a very small two percent of users. Whether you believe that or not, a fix is on the way. Here is the official response from both parties involved:

“AT&T and Alcatel-Lucent jointly identified a software defect — triggered under certain conditions – that impacted uplink performance for Laptop Connect and smartphone customers using 3G HSUPA-capable wireless devices in markets with Alcatel-Lucent equipment. This impacts less than two percent of our wireless customer base. While Alcatel-Lucent develops the appropriate software fix, we are providing normal 3G uplink speeds and consistent performance for affected customers with HSUPA-capable devices.”

There’s no time frame for the fix, but we can imagine that since the statement has been released, it shouldn’t take too long. If you’re uploading huge files such as 5 megapixel images from your iPhone 4 or high-resolution videos from your HTC Aria, it looks like you’ll be stuck with using Wi-Fi only for now.

Just be glad that this wasn’t the start of some revolution where we’re not only limited to the amount of data we consume on the carrier’s network, but also the speeds at which we can download or upload files. That would be the time to start worrying.

The Sprint 3G/4G Overdrive by Sierra Wireless has definitely been versatile as we've seen it offered with different names and...