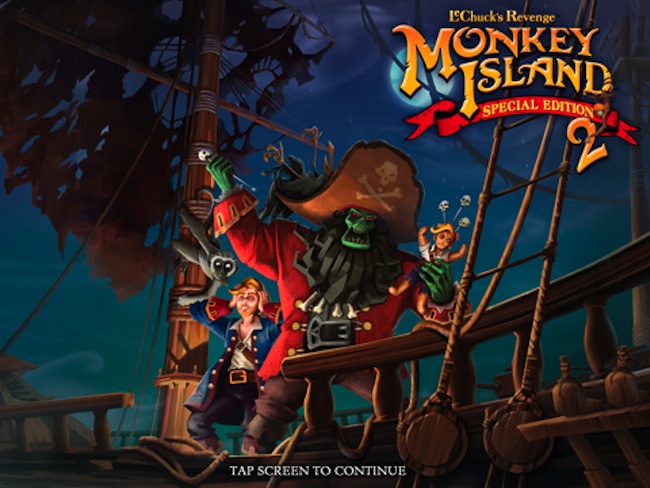 One of my all-time favorite sequels, Monkey Island 2: LeChuck’s Revenge, was announced to be heading to the iPhone & iPad a couple of months ago, and we even snagged some screenshots of the game’s new look. It looks like the day of the game’s release is finally upon us as the game has not only hit the PC, Xbox Live Arcade, and Playstation Network, but it’s also readily available for your iDevice of choice!

Monkey Island 2: LeChuck’s Revenge Special Edition has you playing as Guybrush Threepwood after he’s defeated ghost pirate LeChuck from his first adventure, The Secret of Monkey Island. Guybrush is off to find the mysterious treasure known as “Big Whoop”, and will attempt to, once again, win back Elaine’s love.

Just like with The Secret of Monkey Island: Special Edition, LucasArts did a ton of upgrading to the game. Its graphics now sport and all new contemporary art style with high-definition graphics, complete voice overs for all characters in the game, a re-mastered and re-recorded musical score using live instruments (although I have a soft spot for MIDI), and players can choose to jump between the new special edition graphics or play the game as they remember it in Classic Mode. The game also has an in-game puzzle hint system, for all you not so hardcore pirate wannabes out there who have some trouble understanding what a rubber chicken with a pulley in the middle is used for.

If you’ve never played either The Secret of Monkey Island or its sequel, Monkey Island 2: LeChuck’s Revenge, this is a great opportunity for you to experience the games on your iPhone & iPad.  As fun as it is to play a game that allows you to fling rolled up pieces of paper into garbage bins in a virtual office, real games like the Monkey Island games are well worth your money and time.

Android 2.2 Froyo on the Nexus One destroys iOS 4 on iPhone 4 in web browsing Javascript tests

Android 2.2 is fast. Stupid fast. Crazy fast. I've only been using it since Sunday, but I can say without...