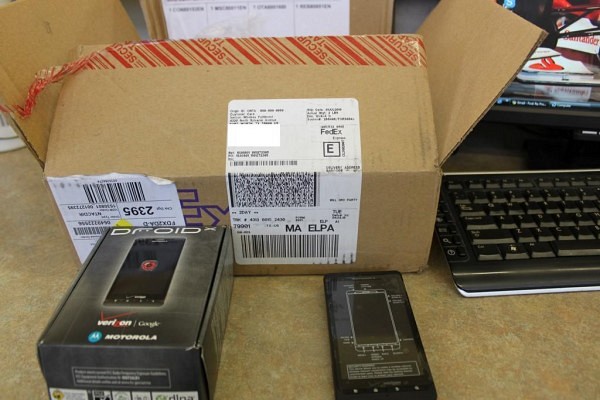 The Motorola Droid X has certainly been causing a stir with its massive screen and tremendous processing power, so it’s no surprise that most eager customers are waiting impatiently to get their handsets. However, it seems like a lucky few have had the Droid X land right at their door steps. The strange thing is that there were no Verizon pre-orders for the Android smartphone, and apparently attempts to call the carrier to get one early yielded no lucky results. Still, there is enough photo evidence out there to prove that the Motorola handset has been hitting customers early.

The folks over at Droid Life have been trying to get to the bottom of the situation. They’ve been calling Verizon, checking warehouse inventory and running the whole nine yards, but the early orders for the Android handset still appear to be a mystery. However, a reader over there found some luck, leading them all to learn that the process has to be done over the phone with consumer sales or customer service. Here is what that reader said:

I just called Verizon as a new customer and they accepted my preorder on a Droid X, stating once they get the SKU numbers they will order the equipment and ship it to me. As of right now that is set for 7/15/2010, but will contact me if they receive them sooner!

We’re only days away from nationwide availability for the Droid X, but for many fans, getting the handset even a day early brings all kinds of giddiness and joy. So if you’re looking to nab the brand-spankin’ new Android handset early, try your luck by calling customer service and let us know if you succeed in getting one before everyone else. At worst, you’ll have your unit right on launch day without having to wait around or worry about stock levels.

Borders is doubling down on its mobile strategy, as it is bringing its e-reader application to Android and BlackBerry. This...