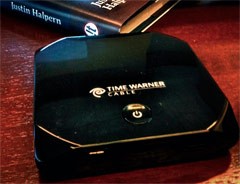 The Sprint 3G/4G Overdrive by Sierra Wireless has definitely been versatile as we’ve seen it offered with different names and labels. Clear has taken the device for its own mobile hotspot plans, and it now looks like Time Warner Cable is doing the same. The cable and Internet provider is offering the same device from Sierra Wireless as the IntelliGo 3G/4G mobile hotspot, which means it will run on WiMax.

Unsurprisingly, everything else is just about the same in terms of the way this little pup functions. It can connect up to five devices via Wi-Fi and it uses 3G, it has a slot for microSD and you can connect it to your computer via USB. It’s not as heavily priced as what you’ll find elsewhere for just $49.99, but pricing will apparently vary by region and only where Road Runner Mobile is offered.

It looks like the Android-powered Motorola Charm isn't too far away from release, as a tipster was able to nab...