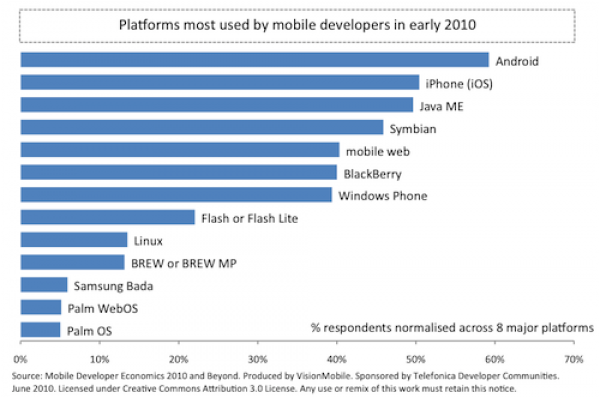 Android OS is apparently the new favorite of mobile app developers in early 2010. We thought that with Android OS enjoying its buzz as the most popular platform last year was a big deal, but it looks like the little green robot just keeps on truckin’. According to a recent survey, developers are now looking at Android as the go-to OS for mobile app development for 2010.

Over 400 developers were surveyed globally, and most have had at least some experience developing for Android. The survey showed that 60% of developers queried had done some work on Android OS. In comparison, iPhone OS trails by almost 10%, enough to give it second place amongst developers’ favorite mobile platforms, with a little over 50% of devs claiming iPhone experience. Java and Symbian are right behind the iPhone, with between 45% and 50% of devs saying they’ve worked with these platforms. Not surprisingly, every other OS is below the 40% mark.

It can get a little confusing when you see Java at number three on the list, despite it having a 3 billion installed user base. And with Symbian, which outsells iPhone 4 to 1, still sits at number 4 on the list. So obviously, just because developers are using a particular platform more, it’s not going always reflect the sales or market share of a platform. The chart below shows just this:

One thing the survey had definitely shown is that developers are now looking beyond the older platforms, and are going for the newer OS’s. Android may be hitting the top of the list because of its openness, while the iPhone is still going on the merits of its integrated and much-hyped App Store. Palm – poor Palm HP – is at the very bottom with both the Palm OS and WebOS being all but ignored by devs.

The takeaway here is that it is again a battle between Apple and Google. Both companies are churning out great products and getting all the attention. HP, do some good things with WebOS please, you’re making it very easy for the top two.

If numbers and stats get your blood flowing, feel free to download the full “Mobile Developer Economics 2010 and Beyond” report here.

Following up on the release of the Android 2.2 source code, affectionately named Froyo, Google has updated their software development...