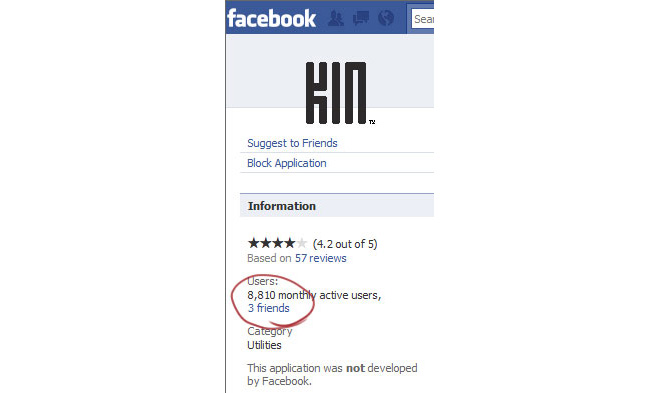 While this may not be a completely reliable method to determine sales numbers for Microsoft’s KIN phones, it looks like the KIN Facebook app goes a long way to debunk rumors that Microsoft only managed to push our 503 KIN devices since it’s launch earlier this year. Contrary to the rumor going around the interwebs right now, the KIN Facebook app page shows that there are over 8,800 active KIN phones as of the time of this writing. Even if 90% of those active KIN accounts belong to Microsoft and Verizon employees or are tied to review units, there had to be more than 500 of the social network-oriented, ill-fated devices sold.

As PocketNow points out, the Facebook app in question is only accessible by KIN users. When you start up the Facebook app, you are automatically registered as an active user. So, the number of active users is a good indicator of KIN phone usage so far.

But, just to clarify, the number of monthly active users doesn’t necessarily reflect the actual number of devices out in the wild. Checking the friends link shows friends of mine that I know aren’t current KIN users and haven’t used the device since they finished their handset review. The active user count also doesn’t differentiate between users that actually bought their phone at a store and those users who are also employees of either Microsoft or Verizon.

Still, as I mentioned above, if even 90% of the active users on the KIN Facebook app did not actually buy a phone, that still leaves Microsoft with way more than 503 devices sold.

Whatever the case, it’s a good thing Microsoft decided to kill KIN. Best to concentrate on their Windows Phone 7 agenda.

Feeling sad about the death of the Microsoft social networking phone? Check out our KIN review here, then check out the memorial site here.
Microsoft KIN One review