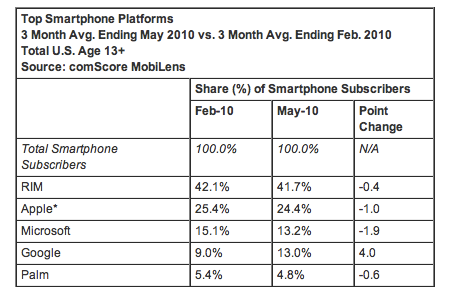 While the overall smartphone market in the US is growing in terms of numbers of consumers sporting phones with brains, it seems Google’s mobile operating system, Android OS, is taking consumer and developer market share away from incumbents platforms like BlackBerry and iPhone. A new study from market research firm comScore shows that every one of the top five smartphone platforms in the US lost market share in the three months ending May 2010 – every one except for Android OS. Compared to the three month period ending February 2010, Android OS managed to grow its US market share by an impressive 4% through the months of Mar, Apr, and May.

To sum up the overall state of the smartphone market in the US, comScore says that 49.1 million Americans were carrying around a smartphone of some sort during the three months ending in May 2010. That’s an 8.1% increase in smartphone adoption, compared to the previous three month period. The clear leader in the US smartphone space was BlackBerry-maker Research In Motion (RIM), with 41.7% share – down 0.4% from the previous three month period. Apple and its iPhone claimed 24.4%share – down 1.0%. Meanwhile, Microsoft held on to third place with 13.2% share – after losing 1.9% share. Android managed to gain a healthy 4% share and finished with 13% market share. That left Palm with just 4.8% share – dropping 0.6 points, as if it even mattered at this point.

As for mobile content usage, mobile phones were mostly used in the US for sending text messages to another phone, with 65.2% of mobile subscribers using this feature. Web browsing came in second place with 31.9% of subscribers getting on the mobile information superhighway. Downloading apps was the third most-used feature, with 30% of users getting jiggy with an app store. As expected from other reports, gaming took a back seat to web browsing, with just 22.5% of mobile phone users playing games on their handsets.

In the end, it looks like Android is on a hot streak for the moment. And, with Android superphones like the Sprint HTC EVO 4G and Verizon HTC Droid Incredible already on market and hot tickets like the Verizon Motorola Droid X and AT&T Samsung Captivate (Galaxy S) on the horizon, Android looks like it’s not slowing down anytime soon!