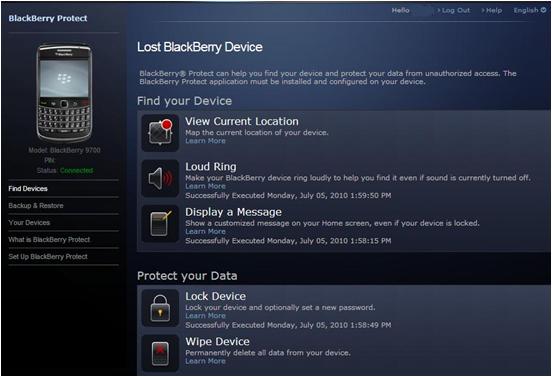 We’ve been hearing about a project from RIM called BlackBerry Shield for some time, first in March, then again a few weeks ago. The rumours were all true, and RIM has announced the private beta of what they’re calling BlackBerry Protect. It exists as both a web service and an on-device application, and can help manage the security of up to five devices – it even plays nice with BES.

As one would expect, Protect is mostly for security, and as such you can remotely find via GPS, lock, or wipe your device through the web interface. You can change the home screen to display lost and found information, or, if you’re feeling cheeky, taunt thieves with cryptic messages. I’d go for something along the lines of “You don’t want to take a turn down fifth, the traffic’s terrible this time of night.” Of course, if you’re positive that your BlackBerry hasn’t been lost or stolen, you can also initiate a loud beep (pulled from your ringtone profile) to find your phone without having to call it and worry that it was left on silent or vibrate.

On the slightly less dramatic side, Protect will also enable regular, over-the air updates for contacts, calendars, tasks, memos, bookmarks, and text messages. This portion is basically a juiced-up version of Google Sync, which, though covering a wider variety of data, is used for little more than bringing your BlackBerry back to full functionality after some horrible tragedy. The on-device app is pretty simple, and is pretty much solely for backing up and restoring data. Personally, I’d like to see this system plug in to Outlook and Google services to sync all of that data wirelessly, since all of that data is going up to the cloud anyway. Sure, enterprise users can already do that with the help of Exchange or Google Apps, but something for us on plain-jane BIS would be nice.

Luckily, a lot of Protect seems to have taken a cue from the scrapped BlackBerry Unite! project, which included more in the way of syncing and sharing (in the off-chance that you could get it to actually work). With any luck, more wireless syncing for the everyman will be included or extended beyond Protect. Combine that possibility with the existing GPS tracking, Protect might start looking a little too much like MobileMe, but honestly, if RIM can offer the exact same functions with a slightly heavier lean towards security and give it away for free, BlackBerry would be taking advantage of one of the iPhone’s few weaknesses.

One small thing that the leaks didn’t reveal is that the whole system will be tying in with the new BlackBerry ID system that is launching with App World 2.0. These are the significant first steps that RIM is taking towards creating a unified identity that’s more than just a cryptic PIN number. I’m just waiting for the next update to BlackBerry Messenger, because if it doesn’t have BlackBerry ID and some kind of desktop interface, I would be shocked and disappointed.

Here’s a still gallery giving the full tour of Protect, followed by a device compatibility list.