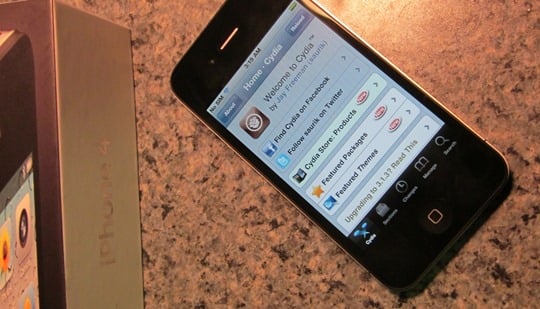 Most of you who had jailbroken iPhone 3GS and 3G handsets were probably waiting eagerly for the iPhone 4 to get cracked, too. Well, be careful what you wish for because it already has been jailbroken. The only catch is that Geohot, the hacker responsible for the jailbreak and jailbreaking previous iPhones, isn’t saying if or when he’ll release it. Talk about a sock in the gut!

For now, instead of throwing all the unapproved apps you want onto your iPhone 4, you’ll just have to deal with the tens of thousands of high quality apps that are available through the iTunes app store. What a shame. If you want the jailbreak soon, though, all you have to do is not ask:

Got one of these in the mail today and figured I’d give it a shot.

As far as a release goes, it probably won’t happen from me. limera1n is little more than a raindrop on a website; it was never mentioned by me previous to this post. pwned4life is a complete invention of some blogger in a basement somewhere. When I said pwned for life, I was referring to the original iPhone, 3G, and Touch; which of course are, by the aptly named PwnageTool.

Again, please don’t ask for release dates. Every person that does makes me want to release a little bit less.

Someone seems a little touchy. At any rate, it seems unlikely that the jailbreak will actually come from George “Geohot” Hotz himself. But with the new iOS, a boatload of apps being released every single day, multitasking and the ability to change your wallpaper images, just how much do you want to jailbreak your new iPhone 4, anyway? Unless you’re pretty hardcore about some of the apps available on Cydia or anywhere outside of the iTunes app store, jailbreaking your iPhone 4 seems more like a novelty these days.

Rodman & Renshaw analyst Ashok Kumar is claiming that the upcoming BlackBerry tablet will include two cameras, one rear-facing and...