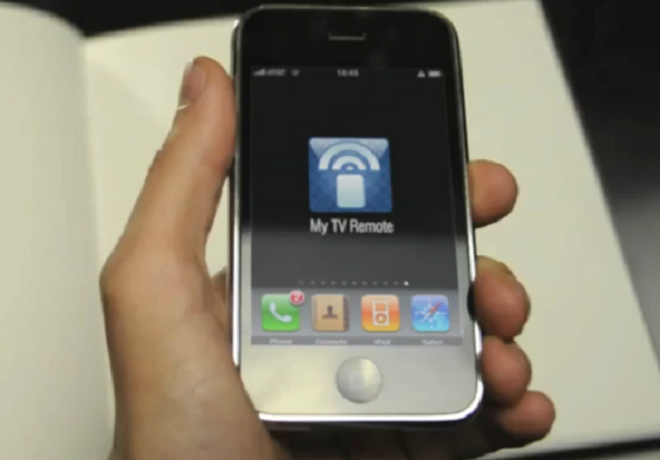 Turning your Apple iPhone into a remote control with an IR dongle is nothing new but the My TV Remote app caught my eye because it’s introducing some cool social networking integration and it comes in at a reasonable price.

It’s clear to me that this whole social networking thing isn’t a fad and I probably spend more time on Facebook than I should. I also watch more TV than I should, so the My TV Remote app is perfect because it marries the two.

With this app, you’ll be able to share what shows you’re watching and invite others to view as well. A chat box can open up on your device that will allow you to talk to other Facebook friends about what you’re watching.

Of course, that social networking integration isn’t diddly squat if the My TV Remote program doesn’t make your Apple iPhone (or iPad) a killer way to control your home entertainment devices. We’ll be getting some of these in-house soon to really work it out but it appears to make controlling your multimedia devices simple.

You simply plug in an IR dongle into the audio jack and you should be able to use the My TV Remote program in minutes. It comes with an electronic programming guide on the device and it should work with most TVs and cable boxes. The company said it will soon have support for DVD players and other home entertainment equipments but it won’t work with my PlayStation 3, which uses Bluetooth.

Another cool aspect of the My TV Remote app for Apple iPhone is the cost, as it will only run you $9.99 for the dongle and app. Rival RedEye costs $50, which may turn off mainstream users.

We’ll have the remote app soon and we’ll let you know how it works in real life. In the meantime, check out the demonstration video below and let us know what you think in the comments.

BMW gets friendly with iPhone iOS 4 ‘iPod Out’ feature

BMW and Apple are joining forces to integrate the iPhone's iOS 4 "iPod Out" feature into the "Ultimate Driving Machine."...