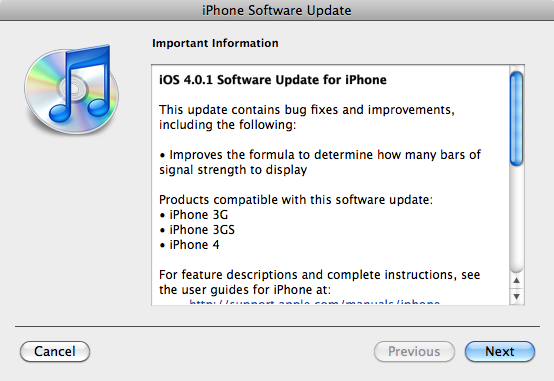 Today is the day that Apple pushes out their first update to the 4th generation iOS mobile operating system – the iOS 4.0.1 update for iPhone 3G, 3GS and iPhone 4 smartphones. Apple recently seeded the beta and an updated SDK to developers, so this was an expected move and we’re not too excited. What we are excited about is what the iOS update means for iPhone users looking to jailbreak and unlock their shiny new fruit-phone. With the release of 4.0.1, we’re probably not too far from seeing the iPhone Dev Team releasing their updated Spirit jailbreak and re-coded ultrasn0w unlock utilities to the iPhour-using masses!

You can find the iOS 4.0.1 update waiting for you in iTunes. Just connect your iPhone to your computer, fire up iTunes, and hit the button to check for updates. It’s as simple as it’s always been to update your Apple smartphone. But, if it were us, we’d hold off on updating to 4.0.1 until the Dev Team has had a chance to chime in on the matter.

Here’s where we stand. The Team has officially confirmed and shown off their jailbreak and carrier unlock solutions for the newest iPhone. They’ve managed to get the Cydia jailbreak app store running on the device and have proven that they’ve successfully unlocked the baseband modem to connect to any GSM carrier in the world. The iPhone 4 used a new baseband firmware that required a complete re-write of the ultrasn0w unlock tool, which is why it took so long for The Team to get it working again.

The only thing holding up the official release of their iPhone-freeing tools was Apple’s impending iOS update. It would have been a shame to release those tools early, only to have Apple render them useless with this just-released update – a lot of work went into re-writing the ultrasn0w unlock utility and losing that would have just plain sucked.

So, now that the update is live, we can expect the Dev Team to either make an announcement of some sort or straight up come out with the jailbreak and unlock software in the near future. Stay tuned!

It looks like Hewlett-Packard (HP) has shelved its plans for an Android tablet. While reports say it's "delayed," I wouldn't...