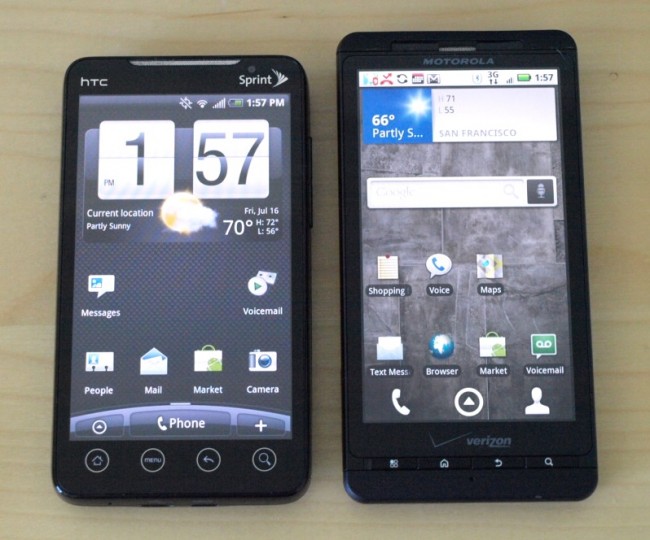 If you’re in the market for an Android OS superphone packed with all the bells and whistles available today, the Verizon Motorola Droid X and Sprint HTC EVO 4G should be high on your short-list – both phones made the cut for our Superphone Shootout, which says a lot. Both phones pack a speedy 1Ghz processor, an 8-megapixel camera, HDMI-out port and the kind of big-screen entertainment options that is rarely seen, even in the superphone category. So, we thought you might like to see how the Droid X and the EVO 4G compare in a little side-by-side duel to the death.

Well, actually, it’s not really a duel to the death, more like a friendly game of checkers, where nobody loses. Because, after all, when you’re talking about smartphones with 4.3-inch displays and cameras that have more pixels than point-and-shoot digital cameras from just a few years ago, you really can’t go wrong with either choice. But, seeing as how different folks prefer different strokes, let’s take a look at how the Sprint HTC EVO 4G compares to the Verizon Motorola Droid X.

Hardware
When it comes to hardware, both the Droid X and the EVO 4G are packing some serious heat. Both rock a 4.3-inch display. Both have an applications processor clocked at 1Ghz. And, both have HDMI-out ports that will allow you to stream videos from your phone to an external monitor or TV in full 720p HD resolution (with audio, no less – video demo here). Then there’s the fact that both Android superphones sport 8-megapixel cameras that will probably put your dinky digital camera of only a handful of years ago to shame. So, what’re the differences?

Well, for starters, the Droid X is a larger phone. It’s thinner, for the most part (camera bulge notwithstanding), than the EVO, but it’s also taller. It’s not too much taller, but it does make a difference when putting an already sizable smartphone slab in your skinny jean pockets. The Droid X also sports physical navigation controls on its front face, whereas the EVO uses capacitive (touch-sensitive) buttons on its front face. The buttons on the X wiggle around a bit, so that’s something to consider if build-quality niggles like that are important to you.

Both phones are also covered in a soft-touch, rubberized finish, which makes for a great in hand feel. The Droid X feels more “rubbery,” while the EVO feels more “spongy.”

Oh, and the kicker in the hardware department is the HTC EVO 4G’s front-facing camera and its integrated kickstand. The Motorola Droid X can lay claim to none of these features.

Software
While both superphones might be running Android 2.1 OS, they use entirely different homescreen skins that set them apart. The Verizon Motorola Droid X uses a refreshed version of Motorola’s MotoBlur UI, while the Sprint HTC EVO 4G goes with HTC’s Sense UI. Both skins offer much the same information and widgets, but present them in different ways.

The camera app on the Droid X is a little more finicky than the EVO 4G’s camera app. Both support touch-focus – allowing you to determine focus points by tapping on the screen – but the X requires that you drag the focus box, where the EVO allows you to simply tap anywhere on the screen to set a focus point.

The phone dialer on the EVO 4G also takes top-billing with a numeric keypad that allows to you tap out contact names rather than dialing a number. As you tap out names, the dialer will bring up contact suggestions that match the combination of letters you’ve just tapped out. Droid X dialer is a number-only dialer, requiring you to pull up the Contacts tab if you need to look up a friend’s phone number.

In the end, both superphones are more than capable of making you one happy Android user. Either handset can hold its own in a smartphone market that has unsurprisingly come into its own over the past year or so, giving even the venerable iPhone a run for its money. You really can’t go wrong with the Droid X or the EVO 4G, but for the sake of helping you pull the trigger on either one, let us break down the pros and cons of each handset below.

One of the really cool things about iOS 4 on the Apple iPhone is the potential to use the Skype...