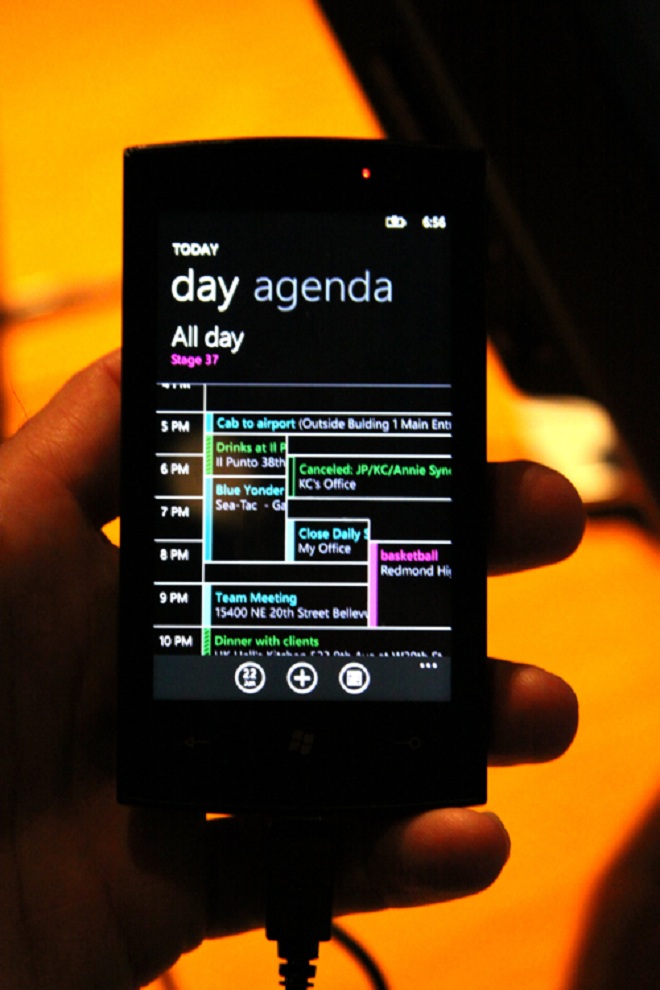 We know that the Microsoft Windows Phone 7 operating system will be available on hardware in the next few months but we’re already seen an early look at the upcoming smartphone platform.

Our version is still in the mail (right Microsoft?) but our pals over at Engadget, BGR and MobileCrunch have been tooling around with it on a developer Samsung phone for the last week and the reactions are pretty much the same: Windows Phone 7 shows some promise but it’s not yet as good as competitors like the iPhone or Android. That should be expected from a first-generation build of the software, I suppose, but you have to wonder if it’s too late as those two platforms, and even RIM with BlackBerry 6, are already well-established and only growing stronger.

The “Metro” UI is the first thing you’ll notice, as this moves away from the app-centric icons in a grid layout we’re seeing. Instead, the UI is a series of hubs that integrate various programs into tiles. Engadget said it was “extremely surprised and impressed by the software’s touch responsiveness and speed.” BGR said “Microsoft basically reinvents the mobile phone homescreen, and we’re not sure we’re in love with it,” and MobileCrunch dug the minimalist nature of it.

The UI also features a lot of animations and graphical flourishes for visual panache. Like the Kin and webOS, there will also be social networking integration into the UI but it looks like Twitter is currently missing. Check out our Windows Phone 7 UI demo from Mobile World Congress:

Like the ill-fated Kin phones, Microsoft Windows Phone 7 will use the Zune software for music playing. This was called “clean, functional and hip looking” by BGR and you’ll also be able to use the Zune Pass for a monthly fee. While no one quite said it was better than the iPod functionality on the iPhone, mobile music fans should be very happy with the multimedia capabilities of Microsoft Windows Phone 7.

There was also a decent amount of praise for the e-mail client but, not surprisingly, it’s much better if you’re using the Microsoft ecosystem. That means Hotmail users and Exchange users should have full functionality at their fingertips. Gmail users can get a more basic experience but it’s not as robust as on Android, yet.

The virtual keyboard was universally praised, which is a great thing for fans of thinner devices. This will (of course) use a version of Internet Explorer and it has been called a good, but not great, mobile browsing experience. There’s no Flash or Silverlight support but that will surely be added in future revisions.

The major complaints about the upcoming Microsoft Windows Phone 7 is the lack of multitasking and cut and paste. While we knew this, the reviewers said it really sticks out like a sore thumb compared to other modern smartphone platforms. This will also come in future versions but customers already expect these today.

So, what’s the verdict so far?

Some parts of Windows Phone 7 are more like a wireframe — an interesting design study, an example of what a next-gen phone platform could be. That’s both good and bad. On one side, we’re still really excited by the prospect of Metro as a viable, clean-slate approach to the mobile user experience, and there are lots of smart moves being made that could lead to greatness. On the other side, Microsoft has to turn this into a viable retail product that can hang with the fiercest competition in the history of the cellphone in just a few months’ time, and there are some serious issues that need to be addressed.

There is no killer application on Windows Phone 7, and we can’t see an overwhelming reason to use one instead of an iPhone, BlackBerry or Android handset. Whether Microsoft’s OS updates to the platform will be enough to change our minds in the future is up to them, but for now, they’ve created a decent mobile operating system from scratch, but it unfortunately still has that Microsoft feel. And that’s not the best thing sometimes.

I look at Windows Phone 7 the same way I’ve always looked at webOS: with restrained hope. Given a bit of luck, a monumental amount of resources, and an influx of developer interest, it has the potential to be a massive success. I don’t, however, think it will be.

Check out each of the “via” links below for more information and let us know what you think in the comments.