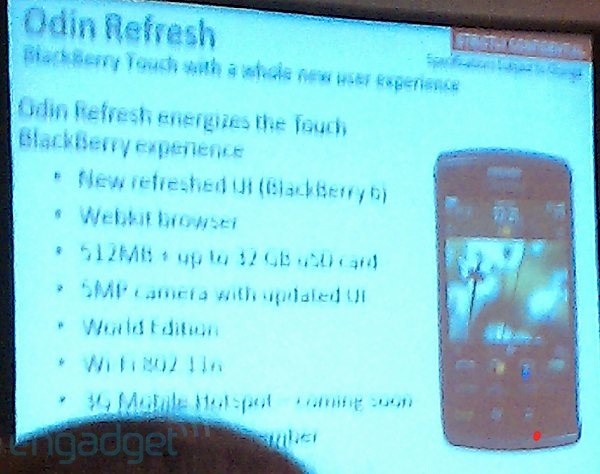 After a lot of talk about a new BlackBerry Storm, we’re starting to see something at least half-way concrete. If you relax your eyes and squint a bit while staring at this leaked slide, first you’ll see a 3D sailboat, then you’ll see a short spec list including BlackBerry OS 6 and the new Webkit browser, 512 MB of RAM, 5 megapixel camera, world roaming capabilities, and Wi-Fi 802.11n with mobile hotspot capability. Unfortunately, that sounds a little more believable than the LTE and 1 GB of RAM rumoured last month.

The new Storm is being touted as a mere “refresh”, but the increased app memory, mobile hotspot, upgraded camera, and OS 6 make it sound like a significantly-improved device. I’m curious if the SurePress clicking touchscreen will be tweaked at all, but honestly, the Storm 2 handled the concept swimmingly, and I’d be hard-pressed to imagine how RIM could polish it further. This is the first time we’ve heard of RIM releasing a device with a mobile Wi-Fi hotspot function, which is quickly becoming the standard among other smartphone manufacturers. The HTC EVO 4G and Droid X leap to mind, but any high-end Android phone, like the Incredible, are likely to get mobile hotspot functions with 2.2 Froyo. It would be nice to see the other upcoming high-end BlackBerrys, like the Bold/Torch 9800 and the 9670 clamshell launch with the feature as well – fingers crossed.

Verizon is a likely candidate to carry the BlackBerry Storm 3, potentially launching before the end of the year.

The BlackBerry Curve 3G 9300 (Kepler) is coming to Rogers. I bet you were wondering when news of this was...