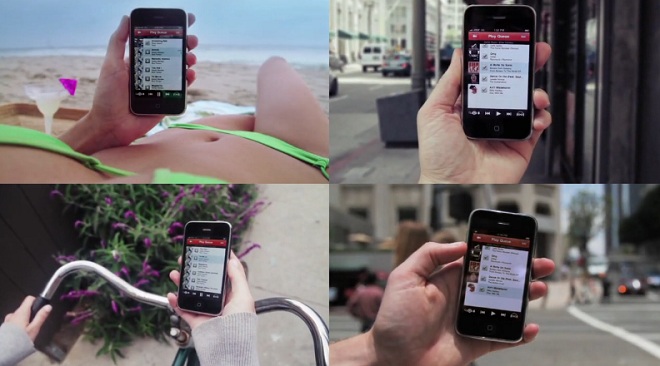 MOG wants to make it easier for you to rock out on the go and the streaming music company has just released its mobile music apps for Apple iPhone and Android.

The app, which we first spotted a few months ago, will let you stream any song from it’s catalog of more than eight million tracks. This includes full albums or “MOG Mobius” radio channels – think Pandora-like discovery. You’ll also be able to sync your play lists from the web to your phone.

“Today’s music lovers want the ability to listen to their favorite music wherever they want without having to pay for each individual track,” said David Hyman, founder and CEO of MOG, in a prepared statement. “With the launch of our mobile apps, we’re getting that much closer to making MOG ubiquitous and making it easy to access the world’s music collection on-demand for a low monthly fee.”

If you’re worried about your signal strength or don’t want to go over you new AT&T data limits, you’ll be able to download an unlimited number of tracks over mobile data networks or WiFi. The songs come at the standard rate of 64 kbps but you’ll have the option of higher-quality downloads at 320 kbps.

All of this mobile music goodness comes with a price though, as the MOG app is free but service will cost $9.99 a month. That’s about the same as similar offerings from Rhapsody on the Apple iPhone or Zune Pass, but I still think it’s a tad pricey for the mainstream. If you cut that price in half, I think everyone and their mom uses it. But, of course, MOG has to pay the licensing fees for the music, so this is probably the best we’ll get in pricing for a while.

The Android version will allow you to run tunes in the background and an update is expected to make this possible with the Apple iPhone. Check out the video introduction of the app below and I’ll tear through the service over the next few days and give you some thoughts. Feel free to do the same with the three-day free trial and let us know what you think in the comments.
It’s definitely in the Android Market and I downloaded it for the AT&T Captivate. I’ll share some impressions soon.

Bell's internal sales portal is prominently showing off the HTC Wildfire, which is a slightly scaled-down version of the Desire...