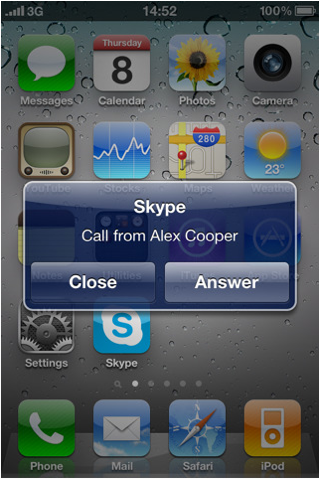 Good news, Skype users with iPhones, Skype has updated its free iPhone app to support the iOS 4 multitasking feature that allows the app to run in the background. In doing so, the refreshed app basically allows heavy Skype users to avoid using their wireless voice minutes on an iPhone 4 or iPhone 3GS with iOS 4 installed. Rather than make or take voice calls over the cellular network, users can now keep the app running in the background and use their 3G data service to handle all outgoing and incoming internet calls.

Not too long ago, Skype updated their iPhone app to work over 3G data networks. Until that update, the app only worked over WiFi connections. We’ll avoid getting into the AT&T-said-Apple-said speculation about why it took the VoIP service so long to allow the iPhone to use the service over 3G. What’s important here is that the ability to make Skype calls for free using nothing but a 3G data connection gave us a glimpse of a new world – a world where wireless carriers are relegated to being nothing more than dumb pipes for ferrying data, even for voice calls. Being able to make free phone calls via a cellular data connection gave iPhone users a foot in the door to this new world where you could essentially avoid using your wireless voice minutes altogether.

Today, all your iPhone-wielding Skype users out there have officially crossed the threshold into this brave new world where carriers can do nothing but watch as voice usage plummets and data usage rules the airwaves. With app running in the background, it’s able to not only make internet calls at your beck and call (no pun intended), but it’s also able to notify you when you get an incoming Skype call – think of an incoming Skype notification as an incoming phone call, but way cooler.

Wireless carriers, your day of iron-fisted rule over excessive voice plan pricing is drawing to an end. It was a good run, though.

Get the updated Skype in the AppStore now.