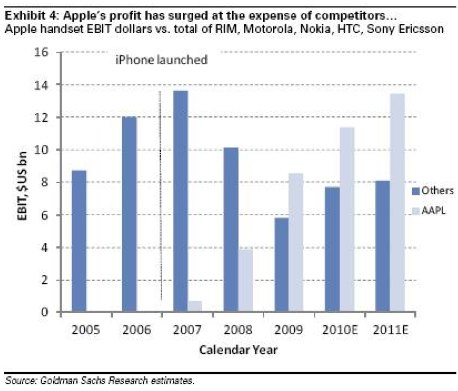 Is there any doubt in anyone’s mind that Apple has completely uprooted and shifted the entire smartphone industry? Since the arrival of the Apple iPhone in the wireless space in 2007, it seems like the veteran players have been doing nothing but playing catch up. Suddenly there was a huge surge in touchscreen smartphones and copycats and look-alikes. It is certainly not an understatement to say that Apple is completely dominating the smartphone market with its iPhone. The chart above just shows how much the competition is being destroyed by the iPhone.

What’s more surprising is that the Apple iPhone doesn’t even sell anywhere near the number of handsets worldwide as Nokia, yet it still earns far more revenue in the same market than the Finnish company. The iPhone maker was proud to be able to claim first in earning more money than Nokia on mobile phones. In fact, Apple is largely responsible for the shift in valuation when considering market share versus value share. Both Apple and RIM have continued to prove this as Nokia loses ground to the two heavyweights.

Now, if you’ll take a look at the graph below, you’ll see just how embarrassing it is for all the other manufacturers when Apple has such a miniscule share of the market: 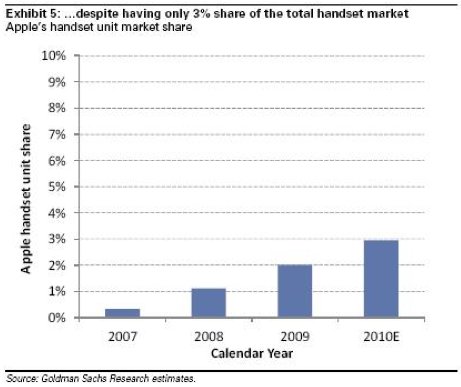 One man not long ago laughed at the Apple iPhone and called it the most expensive cell phone ever, and that it would have absolutely no appeal to business users because it doesn’t have a physical keyboard. I’m sure Apple is happy they’re having the last laugh now.