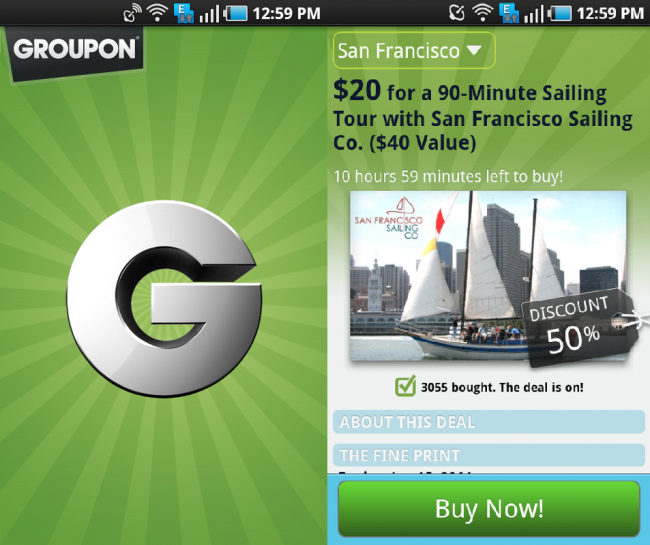 All you Android fans will be happy to know that the daily-bargain service Groupon has finally published an Android app.

If you don’t know what the company does, then you’re probably not one of the 500 million users on Facebook because Groupon advertises like crazy on the social network. It offers users one deal a day with crazy discounts – sometimes up to 80%.

In San Francisco, today’s deal is a sailing trip for $20 that would normally cost $40. The customer gets a steep discount and could become a repeat customer if they enjoy the experience and the retailer gets new customers, so it’s win-win.

The Groupon app shows you the daily deal with the option to purchase it. You can also see more details about the deal, view it on a map and there’s a Facebook Connect option if you don’t want to deal with creating a Groupon account.

That’s about all there is to the app, but I couldn’t imagine you’d need more. The company is trying to make it easier for you to view and buy its Groupon deal wherever you are and I know this app will remain on my phone.

While it’s a simple idea, Groupon has executed extremely well and is absolutely killing it. The company has reportedly raised funds at a $1.35 billion valuation and it has spawned a host of copycats like Joffer.

Any Groupon fans out there? What’s been your favorite deal? I used it to buy a girl a pedicure one time and, boy, did that pay off.

Verizon : Motorola Droid X pulling down 5x more data than any other device

The Motorola Droid X is the hottest Android phone on the Verizon network right now, but it's more than just...