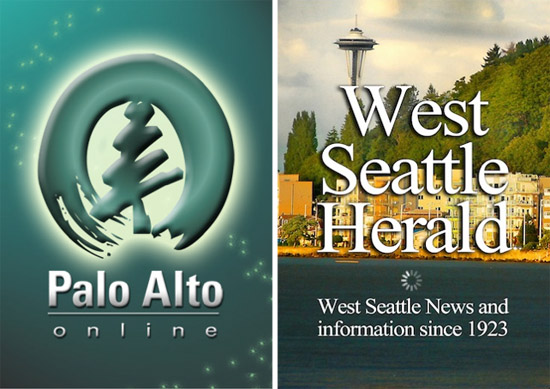 Palo Alto Online and West Seattle Herald are joining the “mobile app revolution” with their own apps for the iPhone and Android, powered by YAPPER. Both apps feature latest news (with push notifications), photos and videos, while at the same time working as community engagement and social media tools.

The last mentioned part is especially interesting, as these apps allow users to submit geo-aware information, stories, photos and videos to the news organization. And once approved, these user-generated story may appear on the news site, in the app as well as on YouTube, Flickr, Twitter, 360News and CNNireport sites with credit going to the user!

That’s something we don’t see in “regular” news apps. Usually, there’s just the news with the ability to share stories with friends. With these two apps, you can BE the story. Love it!

As I mentioned at the beginning, both Palo Alto Online and West Seattle Herald mobile apps are powered by YAPPER, which is a web-based service that allows anyone to create their apps without a single line of code. You can check how it works from here.

(And if you own an Android smartphone, you’ll have to search for both apps manually in the Android Market)

Zumobi, which these days touts itself as the first premium mobile app network, is out with yet another iPhone app....