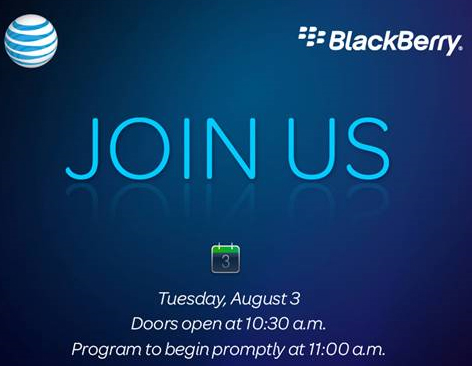 We just got an invite to a joint BlackBerry/AT&T event in New York for next Tuesday, which both of our local boys, Marc and Daniel, will be attending. We’re expecting this to be the announcement of the much-spied BlackBerry 9800 slider, given AT&T’s definitely getting it, and that icon looks supiciously like something we’ve seen in OS 6.

We’re expecting the 9800 to have an HVGA touchscreen, physical keyboard, optical trackpad, 512 MB of RAM, Wi-Fi b/g/n, 3G, 4 GB of on-board storage, and GPS.  Of course, there are a couple of other BlackBerrys in the wings, but the 9670 clamshell and 8980 Atlas are likely headed to Verizon or Sprint, and the 9300 is destined for T-Mobile. The 9780 is a possibility, but as something that’s little more than a traditional Bold with OS 6 slapped on top, it sure would be a letdown.  Maybe RIM and AT&T are gonna go really crazy and announce both the 9780 and the 9800, who knows. Whatever the case may be, we’ll be finding out next week!

Those submitting to the App World can now pick the upcoming BlackBerry 9800 and OS 6 as compatibility options, further...