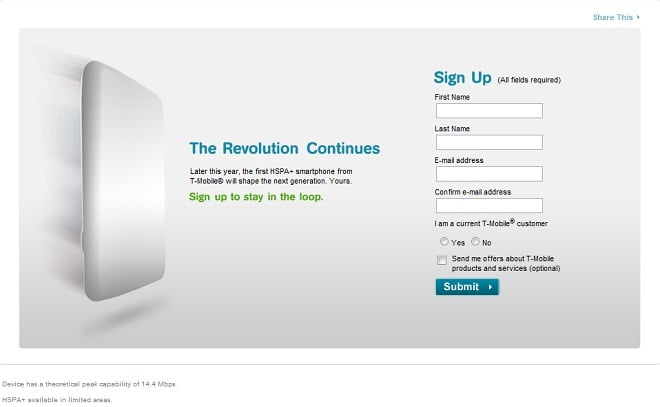 T-Mobile is teasing us with a page about its upcoming smartphone with full HSPA+ capabilities but the page’s code reveals more than T-Mobile may have wanted.

The good folks at Tmonews said the code referred to the first HSPA+ device as the “Vanguard,” which has also been known as the HTC Vision or G1 Blaze. Like the original T-Mobile G1, the HTC G1 Blaze will have a slide-out horizontal QWERTY keyboard and it should sport Android.

Early speculation indicates the HSPA+ smartphone will have a 3.7-inch screen and I’d imagine it would have at least a 1 GHz processor, WiFi, GPS, Bluetooth, and a 5-megapixel camera. The device is scheduled to launch in the September time frame, which may mean it’s too early for Froyo because T-Mobile generally likes to throw on custom software on its devices, especially high-profile ones like its first HSPA+ smartphone.

The big deal about an HSPA+ smartphone is that it will theoretically be capable of utilizing T-Mobile’s boosted 3G network, which can deliver up to 21 Mbps on the go. In a relatively disappointing note, the teaser page says the device has a theoretical peak capability of 14.4 Mbps. Real-world speeds should be about half of that, which is still fantastic, but not quite as fast as us crazy mobile fanatics wanted.

By comparison, the HTC EVO 4G can use Sprint’s WiMax network to get over 10 Mbps on the go, although that’s under ideal conditions. Verizon is in the middle of an aggressive 4G rollout based on Long-Term Evolution technology and its smartphones should be able to get between 6 to 12 Mbps on the go, although these devices aren’t expected until the first half of next year.

So, the T-Mobile HSPA+ probably won’t deliver the fastest mobile data speeds when it is released but it will definitely be up there among the leaders. Are you looking forward to this device, readers?

[Via T-Mobile, hat tip to Tmonews]